Posted on January 29, 2012 by theblondecoyote

On clear days, looking west from the summit of my backyard cliffs, I can just make out what looks like a giant haystack on the horizon. If I were to hike due west from my house, across the Rio Grande Valley, over the Jemez Mountains and into the Rio Puerco Valley, in about 100 miles, I would find myself at the foot of this massive mound of rock.

Horse on the road to Cabezon. Take 550 to 279 West. Driving this road is risky after rain or snow.

Cabezon Peak is an eroded volcanic neck, all that remains of a now extinct volcano. Millions of years ago, hot molten basalt shot up through the central pipe of this volcano, but instead of erupting, it solidified inside the mountain. Over millions of years, erosion removed the surrounding layers of rock, leaving behind a vertical spire of columnar basalt. Shiprock in northwest New Mexico and Devil’s Tower in Wyoming are both famous examples of volcanic necks.

Rising more than 2,000 vertical feet from the surrounding landscape, Cabezon is the largest of more than 50 volcanic necks in the Rio Puerco Valley, a region known as the Mount Taylor volcanic complex. Cabezon means “big head” in Spanish. The name is believed to be derived from Navajo legends about a giant slain on nearby Mount Taylor, whose head rolled down into the Rio Puerco Valley and became Cabezon Peak.

Bowie at the foot of Cabezon Peak

The closer you get to Cabezon, the more impenetrable it looks: sheer walls of vertical basalt columns are surrounded by an exhaustingly steep talus slope. But there is a chimney to the top: a scalable passage hidden somewhere in the rock face. Several years ago I tried and failed to find the path. I was hiking solo that day and every route I spied looked far too dangerous to attempt without a spotter.

So I went home, did some more route research, and recruited a fellow climber to make another attempt on Cabezon. This time we made it all the way up!

An arrow marking the way up to the chimney 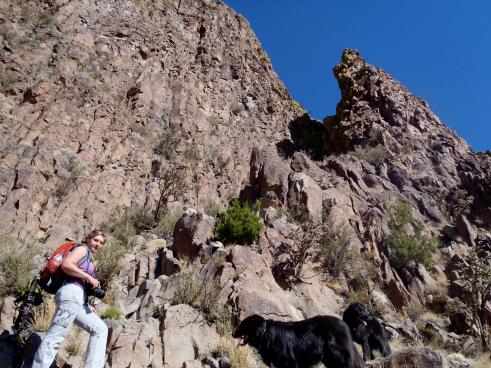 Me & the dogs at the base of the chimney up Cabezon

Cabezon is considered a Class 3 climb, with two short Class 4 sections. The Yosemite Decimal System defines the five climbing classes as such:

Drew and I did not use a rope or harnesses and the dogs made it about 3/4 of the way up before they were stopped by the first Class 4 section, towards the top of the chimney. My dogs are experienced rock climbers and I let them decide what they’re comfortable doing. I left them water at the base of that tricky section and told them I’d be right back. They stayed there like good, loyal dogs, until we got back down. Never, ever, ever tie your dog up in coyote country! 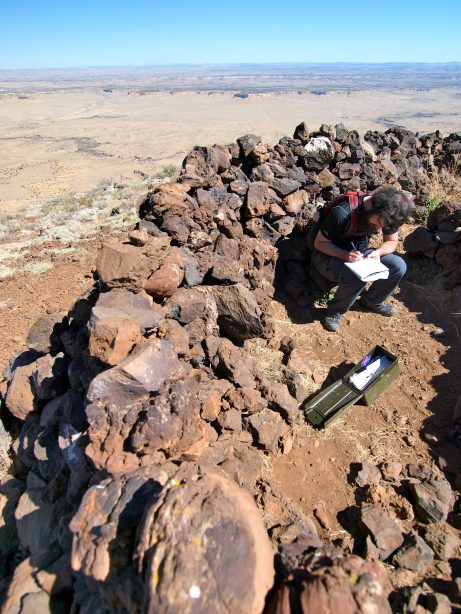 Signing the summit register. Several weeks had passed since the last entry.

Click here for more pictures of our climb up Cabezon and visit Summitpost.org for detailed  route instructions. It’s a beautiful day here in New Mexico and I’m off for another hike! 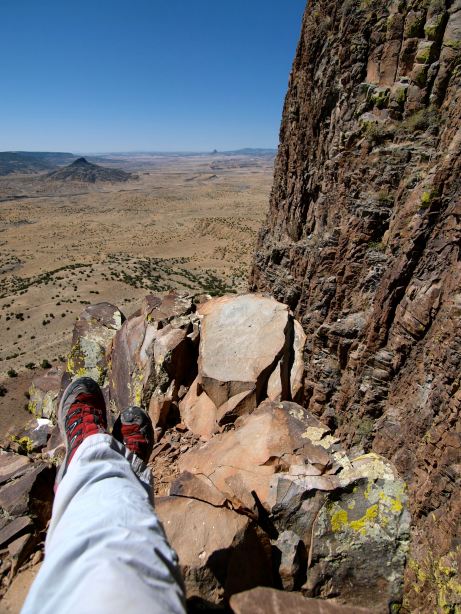 Cabezon Self Portrait, with two smaller volcanic necks in the distance

Mary Caperton Morton is a freelance science and travel writer with degrees in biology and geology and a master’s in science writing. A regular contributor to EARTH magazine, where her favorite beat is the Travels in Geology column, she has also written for the anthologies Best Women's Travel Writing 2010 and Best Travel Writing 2011. Mary is currently based in western Colorado. When she’s not at the computer she can usually be found outside -- hiking, skiing, climbing mountains and taking photographs. Visit her website at www.marycapertonmorton.com.
View all posts by theblondecoyote →
This entry was posted in Bowie & D.O.G., Hiking!, New Mexico, Photography, Road tripping! and tagged Cabezon Peak, dogs. Bookmark the permalink.