Amy & Me, Off Trail in Joshua Tree

Everybody should have an adventure friend, somebody who will reliably get you into trouble and then just as reliably get you back out of it. My adventure friend Amy and I met on a backpacking trip in West Virginia’s Cranberry Wilderness. At the time, Amy was organizing the Mid-Atlantic Backpacker’s Club and I had just moved to Virginia and was looking to meet some fellow outdoors people.

Six of us hiked into the woods on the 4th of July. Rain started that night and didn’t stop for four days. By the time we emerged on the other side, 30-some soaking wet miles later, Amy and I were the only ones still having fun. We’ve been friends ever since, despite never having lived in the same state and rarely the same time zone.

Amy among the blooming bear grass on the Blodgett Canyon Trail, Montana

A few weekends after the Cranberries, Amy and I met up for another trip, this time just us and our dogs in Virginia’s George Washington National Forest. On the way out of town, Amy’s car died in a grocery-store parking lot. We opened the hood and discovered a rat had made an elaborate nest on top of her battery and the terminals were badly corroded.

Amy was unfazed. She ran back into the store and quickly emerged with a bottle of Coke. A few splashed of soda cleaned the battery terminals and we had no trouble flagging down a good Samaritan to give us a jump.

By the time we made it to the trailhead it was well after midnight. The moon was so bright it shone right through the canopy to the forest floor. I suggested a proper night hike: no headlamps. Of course, Amy was game.

We donned our packs and walked slowly into the woods. Once our eyes had adjusted and turned the blackness into shades of grey, Amy and I swung into gear. We spoke little and hiked quickly, our good dogs running free in the woods around us.

A few miles down the trail, we came to a three-sided shelter and decided to stop for the night. Turning on my headlamp, I discovered the shelter was already occupied. Coiled on a ledge directly above the top bunk was a big black rat snake. When I shone my light on him, his tongue flicked faster. 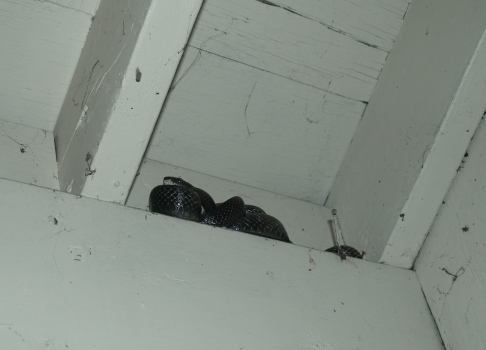 A quick sweep of the surrounding woods revealed rocky, uneven terrain with no place to pitch a tent and a glance at the topo map showed only more rough terrain to come. Clearly, the shelter had been built here because of a lack of tenting options.

Meanwhile, our unwanted bunkmate had not moved anything but its tongue. Amy wanted to relocate the snake. She volunteered to corral it in her sleeping bag and hike it down the trail a ways. I didn’t want to disturb him. He was keeping the shelter rodent-free and I was happy to share the space with him if it meant fewer mice running across my sleeping bag during the night. “Fine,” Amy said, “but you get the top bunk.”

I didn’t sleep well that night, directly below the snake. Visions of the cold-blooded creature slithering into my warm sleeping bag kept creeping into my dreams. At dawn, I peered out and discovered that the snake had not moved from his spot all night. I should have known that if I left him alone, he’d leave us alone. Morning also brought a more grisly discovery: two snake skeletons displayed on the stonewall surrounding the fire pit. 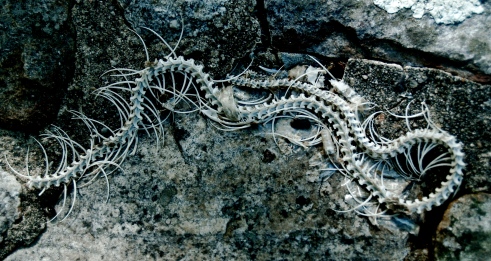 Too bad not everybody believes in truce. Dislike rodents? Don’t kill snakes!

Last winter, I joined another friend on a 2-week spur of the moment cross-country drive from Pennsylvania to California. Amy had moved to southern California, a place I’d never been, so I called her up and asked if she wanted to rendezvous at Joshua Tree. I ended up driving to San Francisco and then flying from there to San Diego. When Amy picked me up at the airport, I hadn’t seen her since Montana and I hadn’t seen her dog Ripley since Virginia, but we all picked up right where we left off; Ripley climbed right into the front seat of the car and sat in my lap. 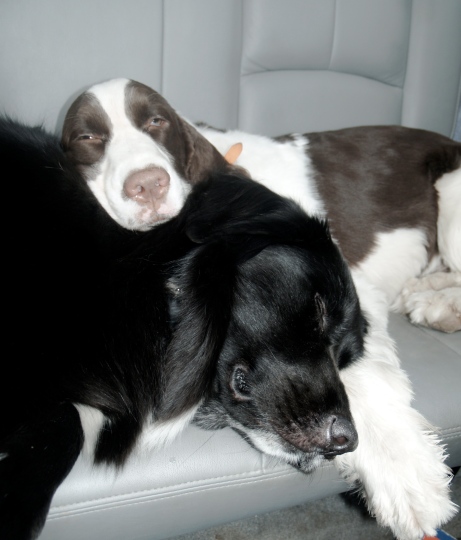 Amy had moved to California after a stint in Utah, where she had worked for a guiding company that dragged juvenile delinquents into the wilderness. She didn’t deal with the kids; she was in charge of logistics: how to get enough food, water and gear to supply a group roughing it deep in the rugged Utah backcountry. She had quit that job – the company was dangerously disorganized, she told me – and was now working for a big retail outfitter in San Diego.

Selling gear hadn’t pushed Amy into the pack-everything mentality; Utah had distilled her down to pure survivalism and when we rounded up supplies for Joshua Tree, she kept asking me, “We don’t need a tent, right? We don’t need sleeping pads, right? We don’t need a stove, right?” Sure, Amy. That night we cooked burritos over a fire, slept out under the Milky Way on the warm crystalline sand and in the morning awoke to the greatest sunrise either of us has ever seen. 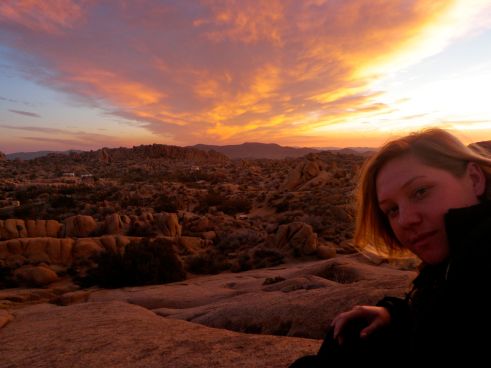 Over breakfast we spread out a map between us and scouted for a hike. Then, weighting the map down with a rock, Amy climbed the nearest boulder above camp and pointed to the horizon. “How about we just go that way?” So we did, hiking off trail, cross-country into the desert.

Amy monkeying around on one of Joshua Tree’s countless crystalline boulders. This place is amazing.

All day long, we hiked all over Joshua Tree. We climbed until our hands bled and then followed animal tracks, faint trails, old two-tracks. By early evening, we were hungry so we both scanned the horizon for our handrails – the landmarks we had noted to guide us back to camp – and headed off in the same direction home, no discussion needed. 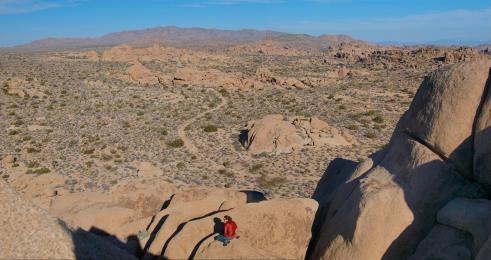 On the way back, I stopped for water and as I was removing my pack, swung my right hand directly into a cactus. Hard. Spines everywhere, spots of blood. Big ouch. Amy pulled out her first aid kit, handed me the tweezers – even minimalists carry tweezers in cactus country – and sat next to me on a boulder, making me laugh while I pulled out the spines, one by one. 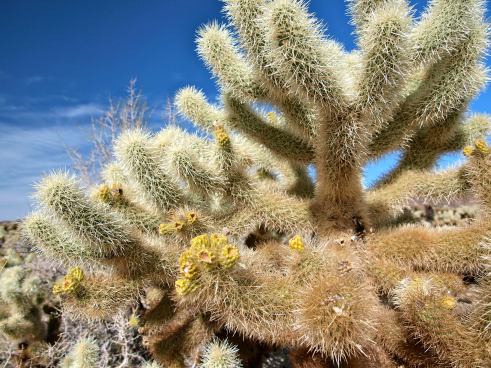 You don’t want to mess with Joshua Tree’s cacti. Believe me.

In my hiking life, I have met only a few other women who feel at home in the outdoors as I do and nobody else who hikes as much as Amy. She’s a beast and she brings out the beast in me, like a good adventure partner should.

Years ago, backpacking with Amy in Montana’s Bitterroot Mountains she asked me if I wanted to climb off trail up a ridge to lunch on top of some rocks. Following her gaze up the steep-sided mountain to a sweet-looking perch, I said yes. “I like people who say yes,” she said, grinning. Ever since, I have always tried to be one of those people who say yes.

Last week, Amy set off on one of life’s greatest adventures: motherhood! She named her son Joshua, although she confessed to me she secretly really wanted to name him Ripley Junior, after her dog. Months ago, when she told me she was pregnant, Amy assured me I was not losing a hiking partner, but gaining one: “We’re going to raise this kid in the woods!” she said. On this day, the world has gained another hiker. Congratulations Amy!

Amy, Dio and me feeling alive by the fire after nearly being trampled by a very angry mother moose on a trail in Montana.

Read my follow up about hiking in Shenandoah National Park with Amy and Josh: Babes in the Woods.

7 Responses to Adventures With Amy