The Lost Art of Hitchhiking

Would you give this guy a lift?

I wish hitchhiking – and picking up hitchhikers – wasn’t so taboo. I quite like giving fellow travelers a lift. Over my past seven years living on the road, I’ve picked up all manner of hitchhikers – men and women, young and old – and I’ve met a lot of great people and never once had a problem. When you do somebody a kindness by giving them a lift and a snack (one of my hitchhiker hostessing tips), I’ve found they’re kind, polite and grateful in return.

On Sunday, when I returned to the trailhead after my 8-mile hike to Joeffre Lakes, a guy was thumbing a ride from the side of the road above the parking lot. He was young, reasonably well-kempt, heading my direction and not having any luck. So I waved him over and offered him a sandwich and a lift. 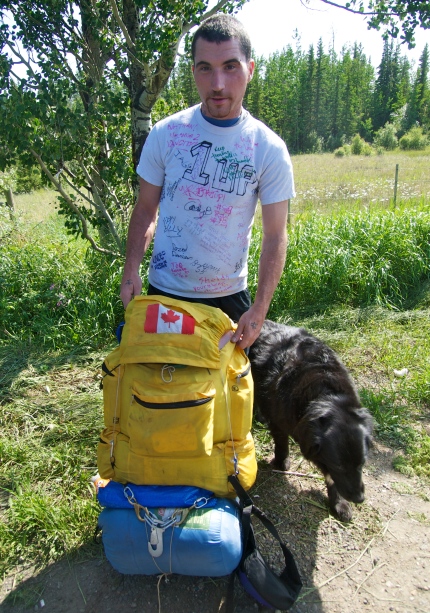 Nate in his souvenir t-shirt, which has been signed by everybody he’s met on his trip, including me (in green).

Over PB&J’s, Nate told me he was on break from University, where he studies Mandarin and Korean, on his way home to Ontario after thumbing all the way across Canada to take a swim in the Pacific.

I put Nate in charge of the ipod – he played Garth Brooks and then the Dirty Dancing soundtrack, making him one of my all-time favorite road trip DJ’s – and we spent the next three hours singing along (Nate made it to the second round of Canadian Idol last year), talking about the lure of travel, the meaning of life and marveling in comfortable silence at the endless natural wonders of British Columbia.

Nate soon confessed that before this trip, he had never once left his home province. After a week on the road, the travel bug had bitten him hard and he was overwhelmed by the sheer scale and beauty of the world and enamored by the kindness of strangers, who had driven him along every spectacular mile. “I don’t know how I’m supposed to stay home after this,” he said, grinning.

When I stopped in Lillooet to get a few groceries, Nate got out of the car, but didn’t follow me inside. Don’t you need anything? I asked him. He shook his head and I asked if he wanted to wait in the car and he shrugged and said, “I can wait out here. Hitchhiker etiquette.” See what I mean? Hitchhikers have excellent manners.

Nate and I parted ways near 100 Mile House – he was heading east, I was heading north – and we shook hands and wished each other the best of luck. Shouldering his enormous bright yellow backpack, Nate placed his hand over his heart, where I had signed his souvenir travel t-shirt, and said “Mary, thank you, for everything. I’ve had the time of my life.” 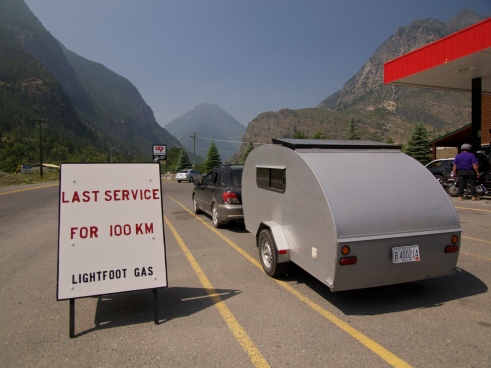 Everything in Canada is few and far between.

Rolling into Vanderhoof, geographical center of British Columbia and ground zero for a very creepy missing persons case. And yes, my dogs are being ridiculous.

I’m glad I had my delightful Canadian hitchhiker adventure when I did, because not long after I dropped Nate off at the intersection of highways 97 and 24, I started seeing missing person posters that hit me hard.

Last summer, when I first started talking about a trip to Alaska, a worried friend sent me a link to a scary story about a girl who had disappeared near Vanderhoof, British Columbia. On May 27th, 2011 20 year old Madison Scott was celebrating high school graduation with a bunch of friends at Hogsback Lake. The next morning, after everybody packed up, her tent was still standing in the campground, apparently unused. Maddie has not been seen since, despite exhaustive searches, ubiquitous missing person posters and a $100,000 reward.

Maddy Scott’s face appears on billboards and missing posters from Quesnel to Vanderhoof.

Maddy’s disappearance is made even more chilling by a long standing pattern of missing women along the Yellowhead Highway, which runs through Vanderhoof between Prince George and Prince Rupert. Over the past 30 years, between 18 and 43 women, depending on whom you ask, have vanished or been found murdered along this stretch of highway 16. Many of the missing women were last seen hitchhiking and there are enough similarities between the cases that authorities suspect they’re dealing with at least one serial killer and possibly several copycats.

Maddy wasn’t hitchhiking, but she’s not the only woman who has disappeared along this stretch of road, nicknamed the Highway of Tears.

Last summer, reading that story gave me pause about driving solo through British Columbia. I have great faith in my fellow man and have always had tremendous fortune when traveling, but I am not immune to scary stories, especially when they are true. Of course, in all my excitement about road tripping through unexplored territory to my 50th state, I completely forgot about the Highway of Tears, until I started seeing Maddy’s face on billboards, gas pumps and bumper stickers.

Ain’t worth the risk, sister

I didn’t pick up any hitchhikers along the Yellowhead Highway. If I had seen a woman thumbing a ride, I might have given her a lift. But it seems all the ominous billboards are working. In 500 miles, the only person I saw thumbing a ride was a middle aged Native man, going the other direction.

Giving and getting rides should not be so dangerous. In most cases and places, I would argue that it’s not. When I told Nate I was an American he asked, “Is it true that hitchhiking in America will get you killed?” I told him no, that the lethal hitchhiking hype is a ruse designed to keep would be vagabonds at home.

I hate that the remote possibility of meeting a psycho could make me miss out on meeting people like Nate. Is it possible that the guy with his thumb out on the side of the road is a homicidal maniac with a axe stashed in his backpack? Sure, anything is possible. But it’s far more likely he’s just trying to get from A to B and that if I show him some kindness he’ll keep the axe stowed and be kind in return.

Humanity should be represented by the people we meet in our lifetime; I try to judge my fellow man by what I see with my own eyes, not by what I hear from the fear mongering media. But driving along the gorgeous Yellowhead Highway, all I saw was Maddy’s sweet smiling missing face. Please visit www.findmaddy.ca. 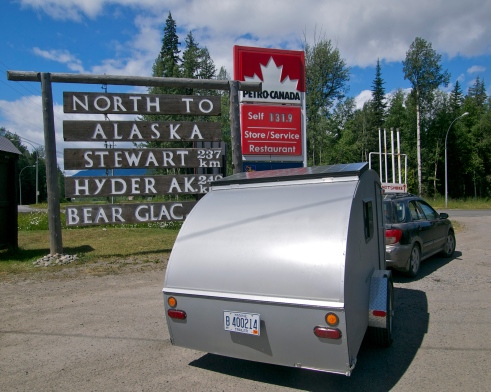 Turning off 16, heading north towards Alaska!

Mary Caperton Morton is a freelance science and travel writer with degrees in biology and geology and a master’s in science writing. A regular contributor to EARTH magazine, where her favorite beat is the Travels in Geology column, she has also written for the anthologies Best Women's Travel Writing 2010 and Best Travel Writing 2011. Mary is currently based in Big Sky, Montana. When she’s not at the computer she can usually be found outside -- hiking, skiing, climbing mountains and taking photographs. Visit her website at www.marycapertonmorton.com.
View all posts by theblondecoyote →
This entry was posted in Beyond the USA, Bowie & D.O.G., Photography, Road tripping!, Sustainable Living, Vagabonding 101 and tagged British Columbia, Canada, Highway of Tears, hitchhiking, Maddy Scott. Bookmark the permalink.

22 Responses to The Lost Art of Hitchhiking