Posted on December 7, 2012 by theblondecoyote 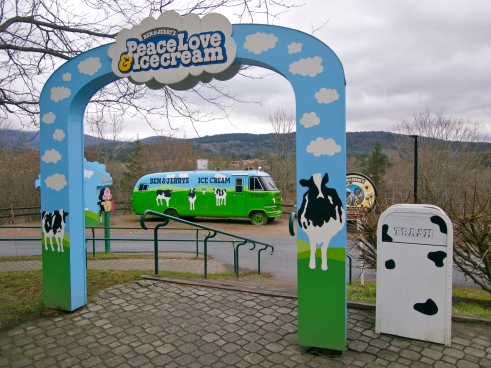 Back in September, when the Astronaut of the Grand Canyon emailed me to ask if I’d be interested in housesitting his place in Vermont for three weeks in November, I was immediately interested. But when he told me it was in Waterbury – home of Ben & Jerry’s Ice Cream Factory – I was sold! 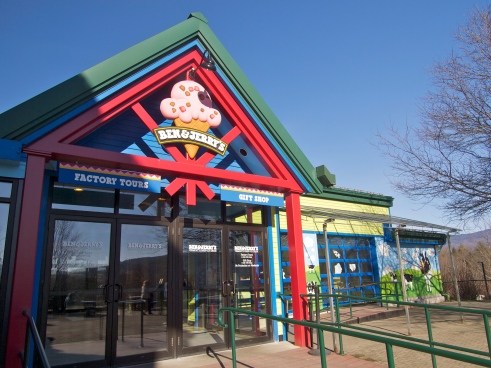 My love of Ben & Jerry’s goes back to my days on the farm in Oregon. After long, hot, dusty days in the field, my coworkers and I often stopped at the local market in Philomath for a pint of B&J’s. At the time, I was living in an off grid cabin with no power, no refrigerator and no freezer, and B&J’s was the perfect size to split right there in the parking lot. After a long day laboring in the sun, with our faces, hands and clothes farm-filthy, eating sweet cold ice cream right out of the container with shiny clean spoons was heaven. 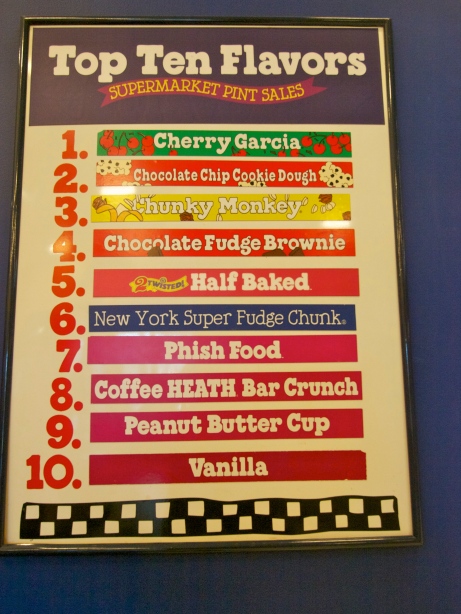 My favorite is #4. I also like Oatmeal Cookie Chunk, but it’s hard to find. Did you know B&J’s has a “Flavor Locator” on their web site? Type in your zip code and your favorite rare flavor and it’ll tell you where you can find it! 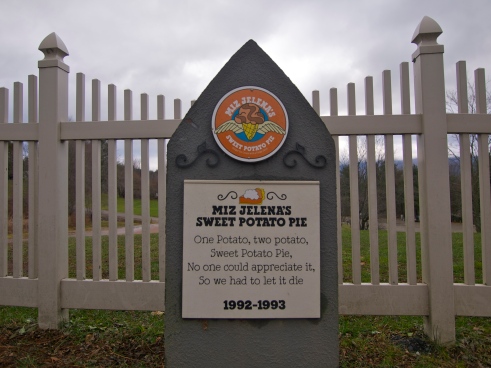 Not all new flavors make the cut. Some end up in the “Flavor Graveyard” behind the factory. I love sweet potato pie, but I don’t know about this flavor.

Once I arrived in Vermont, I got on Google Maps and realized that not only was I in the same town as Ben & Jerry’s, I was within hiking distance! If I could find a route through the woods behind my house, I could end up at the Factory on my own two feet. 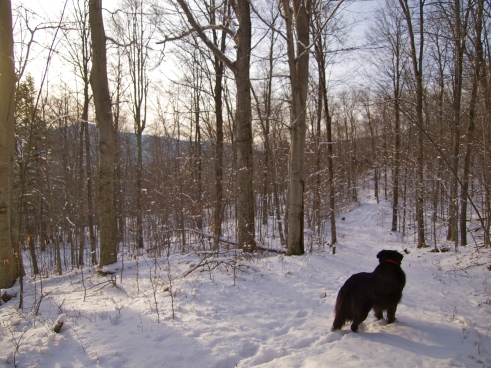 These paths were originally cut to haul trees out of the woods and now are maintained for snowmobiles.

It took me about a week to get my bearings on the maze of old logging roads through the woods behind the house. It’s all too easy to get turned around in strange woods so I always carry a few flourescent plastic streamers  in my pack, the kind used to delineate property boundaries. When I’m hiking in new territory, I use them like bread crumbs to mark my way home, tying bits to branches at potentially confusing intersections. Once I start recognizing landmarks, I untie the streamers and tuck them back in my pack. 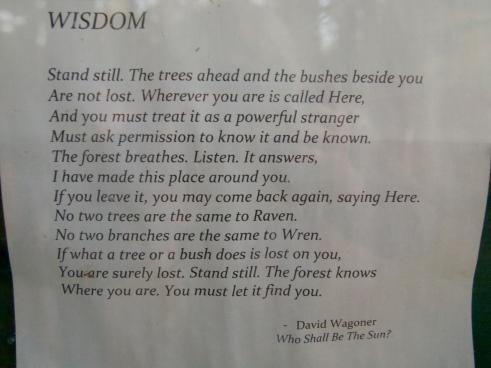 Lovely poem about getting lost and found in the woods, posted at a trailhead in Ripton, Vermont.

Soon enough, I found a route from my house, through the maze, to a dirt road that led to a development and then to Route 100, which leads to Ben & Jerry’s, a round trip trek of about eight miles. I bought a cone of rainbow sherbet and sat outside in the sun with the dogs. Ice cream is even more amazing when you earn it!

I did not order a Vermontster:  20 scoops of ice cream, 4 bananas, 4 ladles of hot fudge, 3 chocolate chip cookies, 1 chocolate fudge brownie, 10 scoops of walnuts, 2 scoops each of 4 toppings of your choice, and whipped cream, served in a “Vermonster Bucket.” The damage: 14,000 calories, and 500 grams of fat. I’d need a much longer walk to justify that! Like, hiking the entire Appalachian Trail! 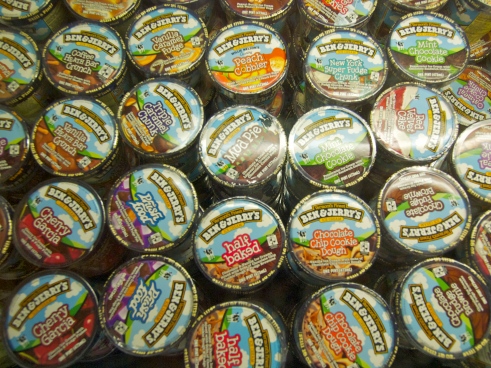 Pints for sale at the factory are still close to $5. I feel like B&J’s should be cheaper here!

Before leaving town, I went back, by car, to buy a souvenir Ben & Jerry’s pint cozy and take the tour ($4, including a free sample of the flavor of the day). The factory tour started with a short, slightly psychedelic video about the history of Ben & Jerry’s, which was started in 1978 with a single scoop shop in Burlington, Vermont by childhood pals Ben Cohen and Jerry Greenfield.

Their ice cream, featuring gobs and swirls of sweet stuff, was locally popular, but didn’t take off nationally until 1986, when Ben & Jerry’s converted RV turned ice cream truck, dubbed the “Cowmobile”, broke down and burst into flames outside of Cleveland, Ohio on a free-scoop cross country tour. The headline “World’s Largest Baked Alaska” flashed around the world, giving Ben & Jerry’s just the publicity boost they needed to go national. 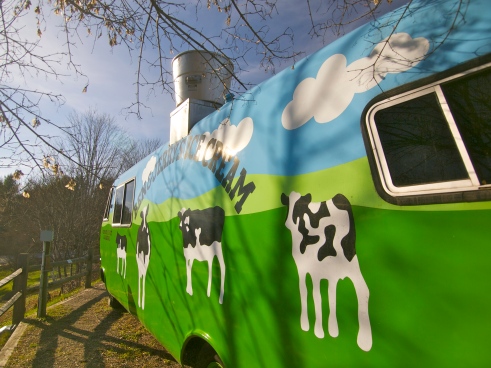 Not surprisingly, they didn’t allow photos of the factory floor. Still, it was neat to see all the bright shiny machinery! They churn out 12,000 pints of Ben & Jerry’s here a day, five days a week. Workers get to take home two pints every day. And I thought farming was dangerous for ice cream consumption! 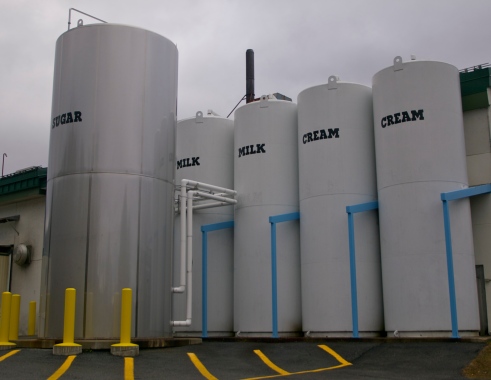 The main ingredients are no secret, but apparently the assembly line is! Wouldn’t want Häagen-Daz to get their sticky fingers on any company secrets!

Mary Caperton Morton is a freelance science and travel writer with degrees in biology and geology and a master’s in science writing. A regular contributor to EARTH magazine, where her favorite beat is the Travels in Geology column, she has also written for the anthologies Best Women's Travel Writing 2010 and Best Travel Writing 2011. Mary is currently based in Big Sky, Montana. When she’s not at the computer she can usually be found outside -- hiking, skiing, climbing mountains and taking photographs. Visit her website at www.marycapertonmorton.com.
View all posts by theblondecoyote →
This entry was posted in Appalachian Trail, Bowie & D.O.G., Hiking!, Photography, Uncategorized, Vagabonding 101 and tagged Ben & Jerry's, Factory, Ice cream, Vermont, Waterbury. Bookmark the permalink.

11 Responses to Ben & Jerry’s: A Pilgrimage