Posted on August 10, 2011 by theblondecoyote

This past weekend, on my way up to Colorado, I drove through the aftermath of the Los Conchas Wildfire. Ignited by a downed powerline on June 26 the Los Conchas fire quickly grew into the largest wildfire in New Mexico history. More than 233 square miles of Sante Fe National Forest burned before the fire was finally declared under control on August 2nd.

From the news reports, the Los Conchas fire sounded devastating and judging from the massive smoke plume visible for weeks from my place in Cerrillos I imagined the scene on the ground in the Jemez Mountains, where I’ve taken many a hike, was terribly grim.

Driving highway 4 through the heart of the Jemez took me right past the spot where the Los Conchas fire ignited. I’m not sure exactly where it was, but it may have been near here: 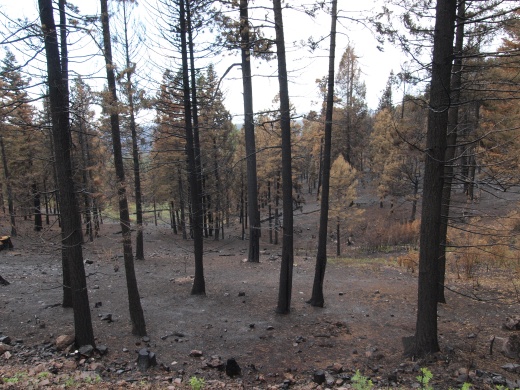 This was among the more badly burned areas I saw along the road. Here the fire “crowned” or reached into the treetops, a scary stage that spreads flames fast and far. Most of the forest I saw from the road (I couldn’t go for a hike- burned trails are still closed) was more of a mosaic pattern with some trees burned and others left untouched.

I was prepared for my drive to break my heart, but instead I found it surprisingly heartening. I know fire is a natural part of forest life cycles, but I really had to see it to believe it. Yes, the Los Conchas fire left behind a lot of blackened trees, but for every dead tree there are already a thousand new shoots rising through the debris.

Leaving the Jemez on Forest Road 103 (in search of Teakettle Rock, one of my all time favorite rock formations) I caught a glimpse of a bear-shaped creature through the trees and sure enough, it was a young – unsinged – black bear. Life really does spring eternal, even from flames. 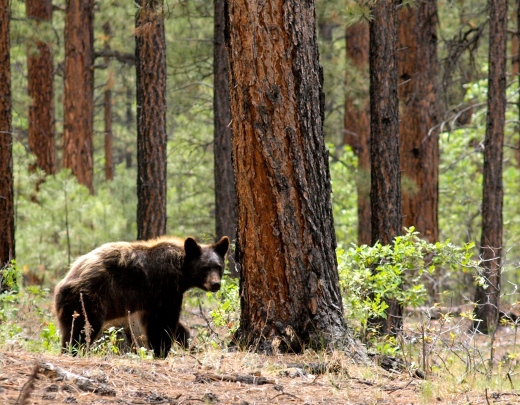 The Real Smokey the Bear

The Los Conchas Fire is out and the forest will grow back, greener than ever, but I hope this is the last smoke plume on my horizon this summer. Like most of the rest of the country, New Mexico is still in drought. We’ve had some rain in the past few weeks and most of the state’s trails have reopened to hiking, but we’re still about 5 inches short of average rainfall. As Smokey the Bear says: Fire danger is still HIGH.

Only You Can Prevent Forest Fires

Mary Caperton Morton is a freelance science and travel writer with degrees in biology and geology and a master’s in science writing. A regular contributor to EARTH magazine, where her favorite beat is the Travels in Geology column, she has also written for the anthologies Best Women's Travel Writing 2010 and Best Travel Writing 2011. Mary is currently based in Big Sky, Montana. When she’s not at the computer she can usually be found outside -- hiking, skiing, climbing mountains and taking photographs. Visit her website at www.marycapertonmorton.com.
View all posts by theblondecoyote →
This entry was posted in Hiking!, New Mexico, Photography. Bookmark the permalink.