Canyon de Chelly is a sacred place. Carved into the sandstone bedrock of northeastern Arizona, the three spectacular canyons, de Chelly, del Muerto, and Monument, lie at the center of the Navajo Nation and at the heart of many Native legends. These canyons have been occupied for thousands of years, longer than anyplace else in North America; the Ancestral Puebloans, Anasazi, Hopi and Navajo have all called this place home.

I visited Canyon de Chelly for the first time a couple of weeks ago, on my way to the Grand Canyon. I had heard great things, but the canyon doesn’t allow dogs, so I had always skipped it in favor of visiting Monument Valley, to the north. Since I had to leave the dogs at home for my Grand Canyon trek, I thought it was a good time to check out de Chelly.

Spider Rock Sundial. Legend has it the higher tower is home to Spider Woman, who taught the Navajo people how to weave.

Canyon de Chelly is a National Monument on Navajo Tribal Trust Land, managed by both the National Park Service and the Navajo Nation. To this day, some Navajo people vehemently oppose the partnership and when you read about the history of white men in Canyon de Chelly, it’s easy to understand why we might not be welcome.

Back in the winter of 1864, Kit Carson led 400 troops into Canyon de Chelly at the height of the Navajo Wars. At the time, Canyon de Chelly was one of the last strongholds still held by the Navajo people. Carson’s men worked from both ends of the canyon, destroying homes, food caches and croplands as they went.

The White House Ruins. Carson's men spared a few of the ruins built high up on the canyon walls.

During the raid, only a handful of Navajo were killed or captured, but left with no food or shelter for the winter, the majority were forced to surrender to Carson’s men. More than 8,000 men, women and children were then marched at gunpoint 450 miles to the Bosque Redondo encampment in eastern New Mexico. Many died along the way. The survivors were hardly the lucky ones; crowded Bosque Redondo was notorious for disease, starvation and violence.

In 1868, the Treaty of Bosque Redondo was signed and the surviving Navajo were allowed to return to Canyon de Chelly. Sixty-some years later, when President Hoover declared the Canyons a National Monument in 1931, the wounds inflicted by white men were still understandably fresh. For some, they will never heal.

Knowing the history of Canyon de Chelly, it makes sense that the Canyon is closed to unaccompanied visitors; To enter by car, on foot or horseback, you must hire a Native guide to show you the way.

The one exception is the White House Ruins trail on the south rim of the canyon, which can be hiked solo, without a guide. The path descends steeply down 600 feet into the canyon via a path worn smooth by centuries of passing feet. In several places, tunnels and steps have been carved into the sandstone and I found myself wondering if the trail was here in Carson’s day. There are only so many ways up and down these precipitous walls.

I also wondered if I was walking in the footsteps of Edward Ruess, a desert wanderer who crisscrossed the Southwest on foot with two burros in the early 1930’s before disappearing without a trace at the age of 20 somewhere in Utah in 1934. Ruess passed through Canyon de Chelly several times on his wanderings, infamously pillaging Native ruins for artifacts, which he sent home to his mother as gifts. 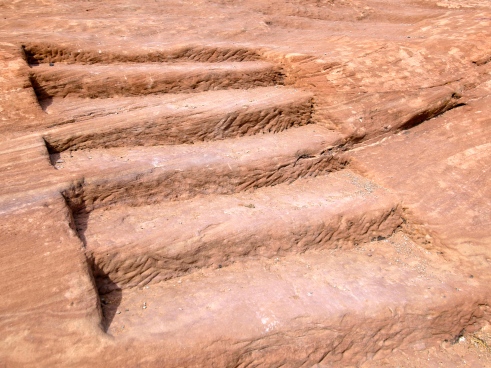 At the bottom of the canyon, I stopped to admire the jewelry being hawked by two women out of the back of an old pickup truck. If I had been carrying cash, I probably would have bought something. Entry to the canyon was free and I felt like buying jewelry was the least I could do to support the locals. The women were pleasant to me, but neither was interested in conversation with a white woman. As I walked away, they slipped back into Diné, their Native tongue.

The White House Ruins sit high up on a cliff, behind a wire fence. Built by the Anasazi, long before the Navajo people, these are some of the largest ruins in Canyon de Chelly. I love ruins and I sat by the fence for a long time, in the shade of a cottonwood tree, searching the walls for rock art, enjoying the alternating warm and cool canyon breezes and listening to the sound of running water. Canyon de Chelly is indeed a magical place. 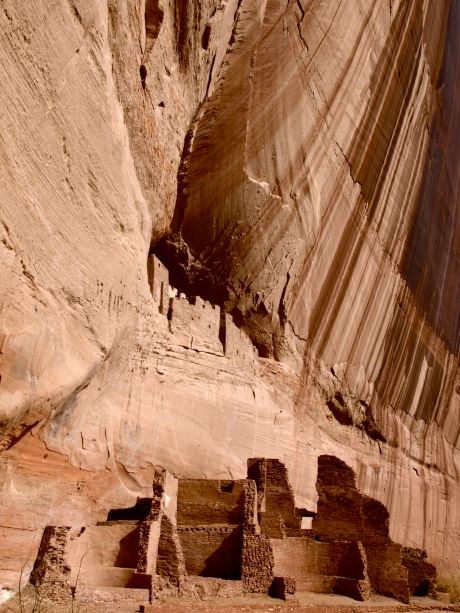 As much as I enjoyed my hike into Canyon de Chelly, I’m not sure I will go back. I walked lightly and acted respectfully, but I couldn’t help but feel I was trespassing. The Navajo people are kind to allow us onto their lands, into their world, onto their sacred ground, but they are reluctant hosts. They certainly don’t owe passage to me or anybody else. If I ever return, it’ll be on horseback, with a Native guide. I hope he will teach me how to say “Thank you” in Diné.

Click here for more photos of Canyon de Chelly. Also check out my previous post the Monsters of Navajoland.

Mary Caperton Morton is a freelance science and travel writer with degrees in biology and geology and a master’s in science writing. A regular contributor to EARTH magazine, where her favorite beat is the Travels in Geology column, she has also written for the anthologies Best Women's Travel Writing 2010 and Best Travel Writing 2011. Mary is currently based in Big Sky, Montana. When she’s not at the computer she can usually be found outside -- hiking, skiing, climbing mountains and taking photographs. Visit her website at www.marycapertonmorton.com.
View all posts by theblondecoyote →
This entry was posted in Bowie & D.O.G., Hiking!, New Mexico, Photography, Road tripping!, Uncategorized, Vagabonding 101 and tagged Canyon de Chelly, Kit Carson, National Monument, Navajo history. Bookmark the permalink.