I kept the rattlesnake overnight, in the snake bin, with several large rocks on the lid. Since I caught him in the afternoon, I didn’t want to risk releasing him with so little time to find shelter before nightfall. Plus, I was pretty sure I could catch him a mouse overnight and sure enough, I did.

As soon as I dropped the dead mouse in the bin, the snake pounced on it and ate it! Too cool. No wonder he was so grumpy yesterday. He probably just woke up from a long winter’s nap and he was HUNGRY!

After breakfast, I drove him down the road aways from my place, away from anybody’s place and released him near some rocks, where I hope he’ll find a good enough home that he won’t come back to mine. 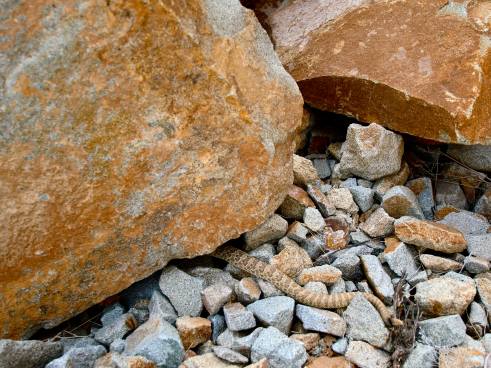 New home! Notice the slightly blurred tail -- he's still rattling at me, even after I took such good care of him! I thought this would be my last look...

But he kept his eyes on me until I walked away. That's a level of interspecies awareness I don't expect from a snake. He's a feisty one!

Mary Caperton Morton is a freelance science and travel writer with degrees in biology and geology and a master’s in science writing. A regular contributor to EARTH magazine, where her favorite beat is the Travels in Geology column, she has also written for the anthologies Best Women's Travel Writing 2010 and Best Travel Writing 2011. Mary is currently based in Big Sky, Montana. When she’s not at the computer she can usually be found outside -- hiking, skiing, climbing mountains and taking photographs. Visit her website at www.marycapertonmorton.com.
View all posts by theblondecoyote →
This entry was posted in Hiking!, New Mexico, Photography, Uncategorized and tagged rattlesnake. Bookmark the permalink.