Posted on April 5, 2012 by theblondecoyote

I don’t know about you all, but it’s April and I’m ready for spring! After a year in the desert – the longest stretch I’ve spent anywhere since my year in Oregon after college – I’m craving green! This time last year, I was road tripping from Maine to New Mexico and I stopped in Pennsylvania for a few days for my mother’s birthday. To celebrate, my brother and I took her to Longwood Gardens, a place we hadn’t been since our childhood.

Longwood Gardens was the estate of golden-age industrialist Pierre S. du Pont from 1906 until his death in 1954. The 1,000-acre Gardens were du Pont’s great passion and throughout his life he added such extravagances as a massive 4.5-acre heated conservatory containing dozens of unique interconnected greenhouses, a 10,000 pipe organ, and a vast outdoor fountains display. Upon his death, he created the Longwood Foundation, which has maintained the gardens and kept them open to the public. 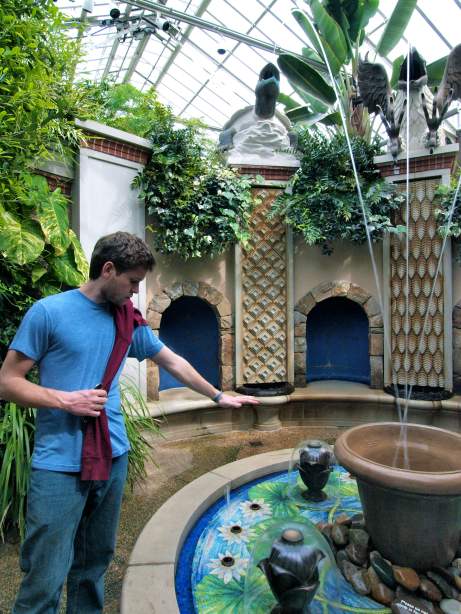 Paul, all grown up, in the Playroom

Longwood is in Kennet Square, Pennsylvania, not far from where we grew up in Wayne and then Strasburg. My brother, sister and I have a lot of fond memories from visits to Longwood; whenever grandparents or cousins were in town, we took them to Longwood to spend the day wandering the vast grounds and exploring the never-ending greenhouses. I remember the kids’ playroom as the ultimate play space with a hedge maze, touchable fountains and terrifying and captivating venus flytraps. Last spring, the playroom wasn’t quite as big as I remembered it and the maze hedges weren’t nearly as tall, but Longwood was as spectacular as ever. Happy Birthday, Mom!

My mom & brother in the Chapel Garden

Lupines in the Conservatory

Mom & Paul, Taking a Break in the Conservatory

Mary Caperton Morton is a freelance science and travel writer with degrees in biology and geology and a master’s in science writing. A regular contributor to EARTH magazine, where her favorite beat is the Travels in Geology column, she has also written for the anthologies Best Women's Travel Writing 2010 and Best Travel Writing 2011. Mary is currently based in Big Sky, Montana. When she’s not at the computer she can usually be found outside -- hiking, skiing, climbing mountains and taking photographs. Visit her website at www.marycapertonmorton.com.
View all posts by theblondecoyote →
This entry was posted in Photography, Uncategorized. Bookmark the permalink.

3 Responses to Spring in Longwood Gardens