Posted on May 1, 2012 by theblondecoyote 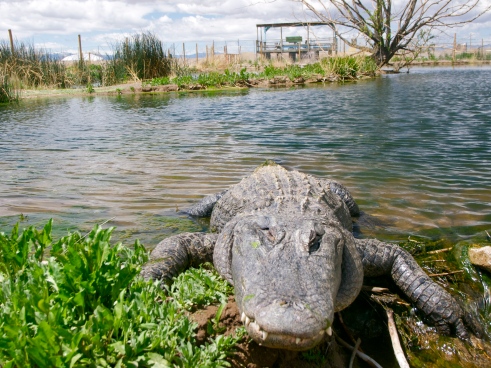 Looking a gator in the eye

Driving north from Great Sand Dunes National Park on highway 17, I passed a curious billboard: Visit Colorado Gators! Alligators in Colorado?! This I had to see. Turns out, Colorado Gators isn’t a gator farm, it’s a tilapia farm that uses alligators to dispose of dead fish! Now that’s sustainable farming!

I've smelled stinkier farms, but fish and alligators are quite ripe.

These days, more than 500 alligators and 100 snakes, reptiles and lizards call this stretch of highway between Mosca and Hooper home. Surrounded by snowcapped mountains, it may seem like a random place for a reptile farm, but there’s a good reason for this location: underground hot springs gush 87 degree water.  Colorado’s gators are warmer year round than Florida’s!

In addition to disposing of dead fish and fish byproducts, the alligators are also fed alligator chow: dry pellets resembling dog food. When the farm got their first crop of alligators from Florida back in 1987, they sometimes fed them road kill, but eating meat made the gators much more aggressive towards each other – injuries inflicted by other gators are the leading cause of gator death at the farm; they are not killed for their hides or their meat! – and towards their keepers.

Alligator chow- made from fish parts at a pet food factory in Denver. Who knew there was a market for such a thing? The staff at Colorado Gators always appreciate visitor help in feeding the gators. Just ask for a bucket of gator chow at the front desk.

Feeding time! Hard to imagine these guys getting more riled up over meat. They were pretty keen on those pellets!

Even without feeding meat, there’s no love lost between the gators and their keepers. I asked Keeper Jay if  the gators know him – some  have been here for over a decade – and he said yes, but that just means they hate him the most. “Gators aren’t nice. The more they know you, the more they want to eat you and anybody who thinks differently is going to end up getting bitten or surrendering their gator.”

I bet gators are crunchy too!

An alligator for a pet might sound like a really bad idea, but about half the 500 alligators at the farm started out that way. Over the past 20 years, Colorado Gators has become a repository for other unwanted pets that became too big and too dangerous, including snakes, lizards and spiders. One cage holds four ex-pet boas, all around 20 feet long!

All the proceeds from ticket sales ($15 for adults, $7.50 for kids) go towards the care of the unwanted gators and other animals and donations are gladly accepted. Colorado Gators also hosts school groups and takes their reptile show on the road to educate the public about reptiles that make good pets (like corn snakes) and those that definitely do not (like rattlesnakes). 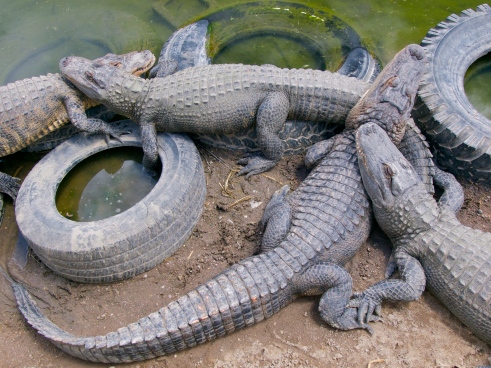 Gators only show love towards each other, and then only a little, when there's no food around

All in all, Colorado Gators was an awesome detour! I’ll be back soon… I signed up for an alligator handling course later this month! Gonna add it to my resume, under “Rattlesnake Wrangler“… 🙂

Mary Caperton Morton is a freelance science and travel writer with degrees in biology and geology and a master’s in science writing. A regular contributor to EARTH magazine, where her favorite beat is the Travels in Geology column, she has also written for the anthologies Best Women's Travel Writing 2010 and Best Travel Writing 2011. Mary is currently based in Big Sky, Montana. When she’s not at the computer she can usually be found outside -- hiking, skiing, climbing mountains and taking photographs. Visit her website at www.marycapertonmorton.com.
View all posts by theblondecoyote →
This entry was posted in Photography, Road tripping!, Sustainable Living, Uncategorized. Bookmark the permalink.