Posted on June 6, 2012 by theblondecoyote 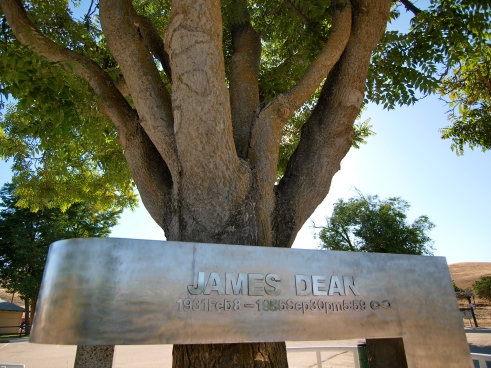 On September 30th, 1955 James Dean was driving his Porche 550 Spyder west on state road 46, en route to a car race in Salinas, California. Approaching the intersection of 46 and 41, near the town of Cholame, a Ford coupe traveling east on 46 veered left across the oncoming lane and crashed head on into Dean’s silver Spyder, killing the young actor. He was only 24.

James Dean is buried in Fairmount, Indiana, not far from where he grew up on his aunt and uncle’s farm. In 2005, on the 50th anniversary of Dean’s death, the state of California renamed the fatal intersection of 46 and 41 the James Dean Memorial Junction, though the two roads have long since been realigned to make the intersection safer. 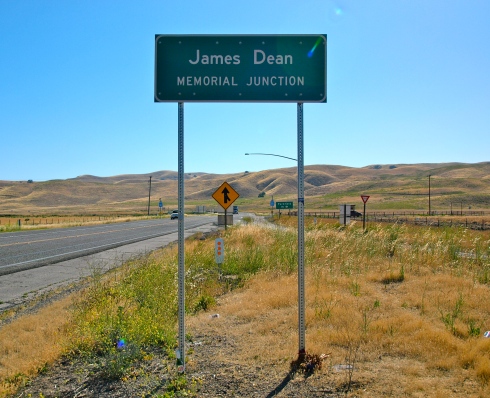 In 1977, a silver stainless steel memorial was erected in Cholame, less than a mile west of the intersection by Japanese businessman Seita Ohnishi, a devoted James Dean fan. The steel sculpture is wrapped around a tree of heaven and features one of Dean’s favorite quotes from  Antoine de Saint Exupéry’s The Little Prince: “What is essential is invisible to the eye.” 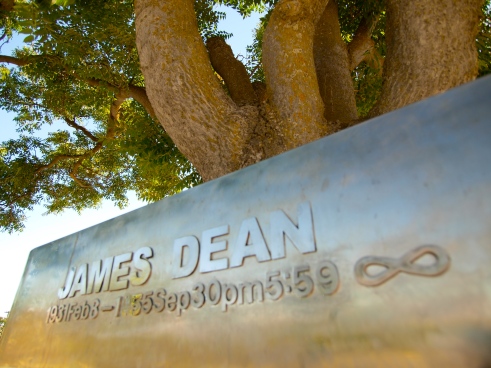 The memorial sits right outside of the Jack Ranch Cafe, a small restaurant with great milkshakes and greasy food that capitalizes on its Dean-adjacent location by selling lots of random James Dean paraphernalia. 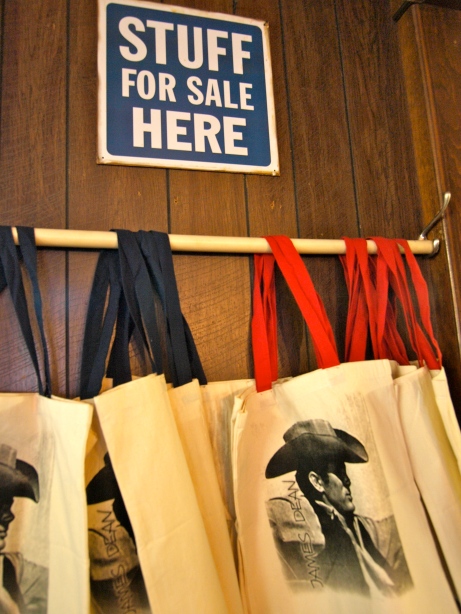 Sitting in a booth under a James Dean poster, enjoying a mint milkshake, thinking about that arresting jailhouse scene in Rebel when I realized Dean was a force, not just a pretty face, I overheard the parents at the next table tell their young son, his arm wrapped in gauze, that he could have anything on the menu. He had been bitten by a rattlesnake the day before and this was his victory meal. That kid got himself two milkshakes. Long live the young tough rebels in this world. 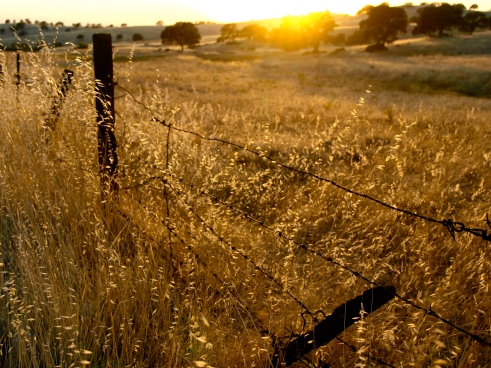 Mary Caperton Morton is a freelance science and travel writer with degrees in biology and geology and a master’s in science writing. A regular contributor to EARTH magazine, where her favorite beat is the Travels in Geology column, she has also written for the anthologies Best Women's Travel Writing 2010 and Best Travel Writing 2011. Mary is currently based in western Colorado. When she’s not at the computer she can usually be found outside -- hiking, skiing, climbing mountains and taking photographs. Visit her website at www.marycapertonmorton.com.
View all posts by theblondecoyote →
This entry was posted in Photography, Road tripping!, Uncategorized. Bookmark the permalink.

6 Responses to Respects to James Dean