Posted on October 23, 2012 by theblondecoyote 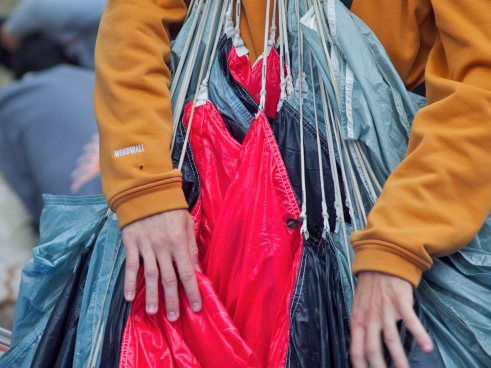 A BASE jumper carefully refolds his parachute for another jump.

I finally made it to Bridge Day, the one day BASE jumping festival at the New River Gorge bridge in Fayetteville, West Virginia. My dad grew up in Fayetteville and I’ve been hiking and climbing at the gorge on many occasions. I always seem to be elsewhere in October, so this was my first Bridge Day. The experience was much like skydiving was for me: once was probably enough. 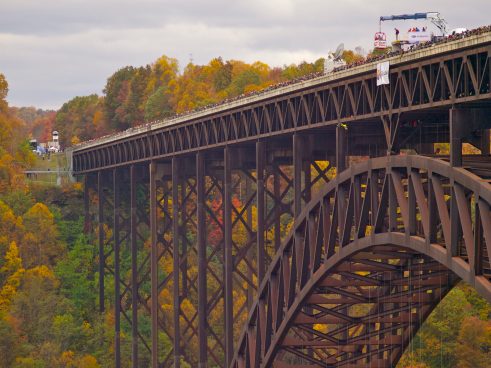 One jumper back flipping (in yellow), another on deck. The best view of Bridge Day was far off the bridge. (Click to enlarge.)

I’m not an extreme athlete but I’ve been to a few extreme sports festivals, the Ouray Ice Climbing Festival in Ouray, Colorado and the New River Rendezvous, also in Fayetteville, to name a couple. My favorite thing about climbing festivals is meeting the athletes, talking to them about their passions, and getting travel tips for the best places to watch the pros. 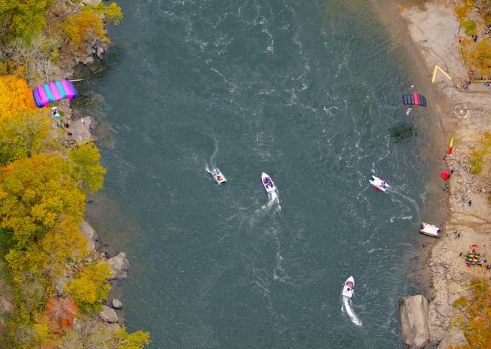 BASE jumpers parachute to the bank of the New River. In more than 1,000 jumps, only 103 people landed in the water, where they were quickly picked up by rescue teams in boats.

I think this is what I missed most about Bridge Day: talking to the jumpers. The way the bridge was set up, it was very hard to get close enough to the participants to actually talk to them. I wanted to ask where they were from, how many prior base jumps they had done, how many times they were hoping to jump that day, where their dream jump destination might be. Unfortunately, as soon as I fought my way through the crowd to where the the jumpers were lined up, I was told by a very imposing police officer to move along. Lesson learned: next time, get a press pass. 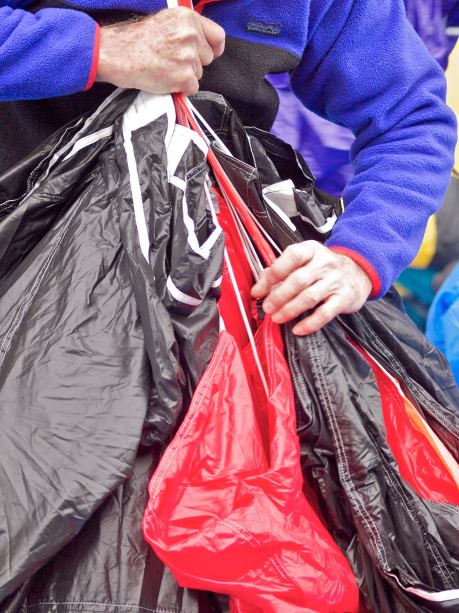 I did manage to get a couple of shots of jumpers repacking their parachutes. I love these! Such a delicate procedure and it really shows in their careful hands.

If there is a next time, that is. Watching the jumpers leap, flip and dive off the New River Gorge Bridge was a thrill; my feet tingled every time I saw somebody take the plunge. But glimpses of the daredevils were few and far between. By far, the vast majority of my time at Bridge Day was spent fighting through the crowd of 100,000 people, many of whom seemed less interested in the jumpers than the gauntlet of food trucks lining the bridge.

This was the other extreme of Bridge Day: Extreme eating! Deep fried twinkies, oreos and candybars, whole turkey legs, a stacked sandwich called the 350: chicken tenders, mozzarella sticks, and fries, all on a bun. Something tells me BASE jumpers don’t eat many of those kinds of meals… 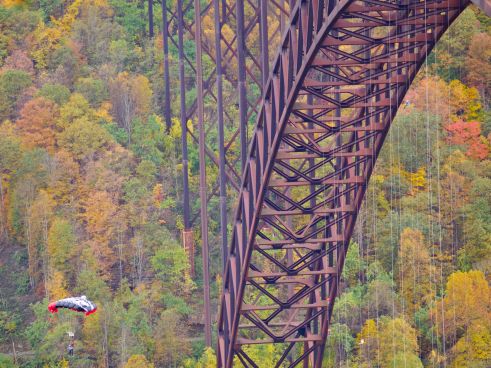 BASE jumper & rappellers. How many rappellers can you count dangling under the bridge? (Click to enlarge.)

A few stats from this year’s Bridge Day, courtesy of the Official Bridge Day blog:

• 450 jumpers from 41 states and 10 countries made 1,036 jumps in 6 hours. 0 parachute failures and only a handful of relatively minor injuries (I saw one guy land in the trees, ouch!).

• 17% of those jumping at Bridge Day 2012 were making their very first BASE jump! To qualify to jump at Bridge Day you need a minimum of 100 jumps from an airplane.

• 131 jumpers landed in the cold waters of the New River instead of on shore. All were quickly rescued by EMT’s in speed boats.

• 10% of the 450 jumpers were women and only 3 were from wild, wonderful West Virginia.

Would I ever BASE jump? No way in hell. I went skydiving once and absolutely hated the free fall part of the jump. Once the parachute came out, I loved the sensation of floating, but the fall itself was horrifying. Never again. Next time I get the urge to fly, I’ll try paragliding or hanggliding. 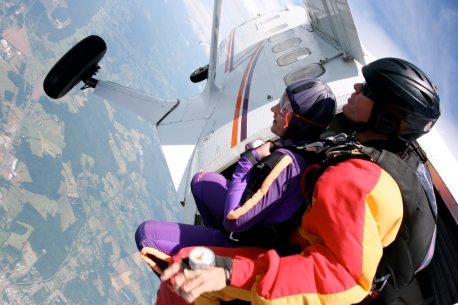 How do you follow up a day watching BASE jumpers plunge off the western hemisphere’s longest arch bridge? By going ziplining! Stay tuned for a post…

Check out my 2008 skydiving video here.

Mary Caperton Morton is a freelance science and travel writer with degrees in biology and geology and a master’s in science writing. A regular contributor to EARTH magazine, where her favorite beat is the Travels in Geology column, she has also written for the anthologies Best Women's Travel Writing 2010 and Best Travel Writing 2011. Mary is currently based in Big Sky, Montana. When she’s not at the computer she can usually be found outside -- hiking, skiing, climbing mountains and taking photographs. Visit her website at www.marycapertonmorton.com.
View all posts by theblondecoyote →
This entry was posted in Photography and tagged BASE jumping, Bridge Day, Fayetteville, New River Gorge. Bookmark the permalink.