Posted on October 30, 2012 by theblondecoyote

I’m currently in western Virginia, pretty far from the center of Sandy. So far we’ve had high winds and rain, but the James River doesn’t seem to be rising and the Teardrop hasn’t blown away yet. My friends and family farther east are all safe and dry, though many of them are in the dark. In honor of Sandy and the awesome power of epic storms, here’s my account of the craziest storm I’ve ever witnessed: an exploding sky over a wind farm on the high plains of eastern Colorado.

In my seven years living on the road I have camped out more nights than I have slept under any one roof. I love camping, but every now and then I suffer through a wretchedly wet night. I can handle being cold. Getting wet, really wet, in the kind of rain that drowns any tent and necessitates a trip to the laundromat to dry everything out the next day, is pure, abject misery. 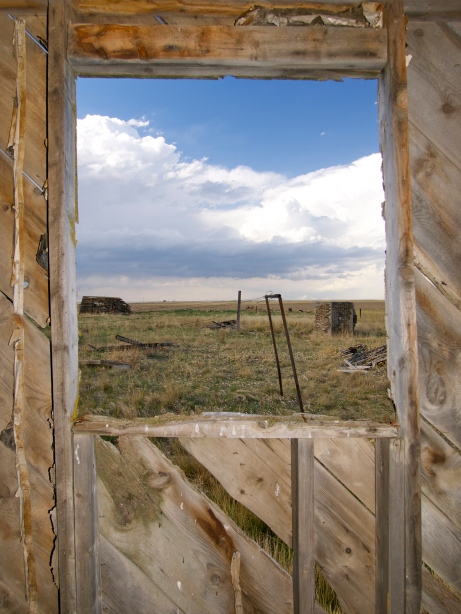 This past weekend, camping in a rainstorm in the Pawnee National Grasslands east of Denver, I didn’t get wet, thanks to the Teardrop, but I also didn’t get any sleep. In that one night, I saw more lightning than I’ve ever seen in my entire life. It’s hard to sleep when you’re sure you’re about to be incinerated.

Evening walk in the calm before the storm

What a storm! All night long, torrential rain washed the outside of the Teardrop. The wind was so powerful that we were sure we were being blown halfway across the prairie. I can sleep through rain and wind. In fact, rain pinging and pattering on the outer skin of the Teardrop has quickly become one of my all time favorite sounds. But I could not sleep through that thunder and lightning.

I know that in theory, a car is the safest place to be in a lightning storm. The Teardrop is made of metal and sits on rubber tires, so it should provide the same kind of protection. It’s a nice theory, but I really didn’t want to test it out. The bolts I saw exploding out of that sky were beastly, more powerful than god. I’m sure that if one hit the Teardrop, it, and I, and everything I own, would explode into stardust.

When we chose that spot to set up camp, I knew a storm was brewing. Massive thunderheads of big white puffy clouds were rising to incredible heights over the flat landscape. As the sun set, the sky turned deep purple, then black and the wind picked up, blowing those storm clouds in our direction. I thought about moving camp, off the bluff, farther away from the wind farm cross the valley with its massive wind turbine lightning rods. But I parked on the butte because I wanted to see the storm.

When lightning hits a wind farm, it comes to play. All night long, countless bolts fired down on those turbines. One bolt would hit, conducting a single solid stream of fire from the sky for several long seconds, then the single bolt would split into multiple flailing sideways tendrils that ricocheted from one turbine to another. I was sure the wind farm would be black and smoldering by morning.

Sorry, no photos. I couldn’t shoot properly through the windows of the Teardrop and going outside would have been insane. I tried at the window for a few minutes, but then made myself put down my camera and just watch. Somethings should not be experienced through a viewfinder. I stayed up most of the night, watching the lightning out the windows, huddled in the middle of the Teardrop, trying not to touch anything in the event of a strike. My dogs slept soundly, foolishly unimpressed, as always, by lightning.

The next morning I opened the door to find that the wind hadn’t moved us an inch. Even more shocking, the turbines were still tall, white and turning, apparently unfazed by the lightning storm. They must be grounded like no other. As for Sarah and I, we were dazed, mostly sleepless, but thrilled to have survived the storm of our lives. Now I know how it feels to be a sailor on a ship at the mercy of a storm.

Mary Caperton Morton is a freelance science and travel writer with degrees in biology and geology and a master’s in science writing. A regular contributor to EARTH magazine, where her favorite beat is the Travels in Geology column, she has also written for the anthologies Best Women's Travel Writing 2010 and Best Travel Writing 2011. Mary is currently based in Big Sky, Montana. When she’s not at the computer she can usually be found outside -- hiking, skiing, climbing mountains and taking photographs. Visit her website at www.marycapertonmorton.com.
View all posts by theblondecoyote →
This entry was posted in Bowie & D.O.G., Hiking!, Photography, Road tripping!, Teardrop Trailer, Uncategorized, Vagabonding 101 and tagged epic storm, lightning, Pawnee National Grasslands, Teardrop trailer, wind farm. Bookmark the permalink.

14 Responses to Explosions in the Sky: Pawnee National Grasslands