An Invite to Vermont from the Astronaut of the Grand Canyon

Posted on November 4, 2012 by theblondecoyote

Self Portrait with the mighty Colorado

Every year for the past five years, I have climbed a mountain on my birthday. This past year, for my 30th, I tackled the inverted mountain that is the Grand Canyon. I arrived at the bottom, on the shores of the blue-green Colorado, on my 30th birthday.

In the winter, rafting trips on the Colorado are restricted to one private party a day. Enthusiasts play the lottery for years and some pay thousands for the opportunity. We didn’t expect to see any rafting parties, but serendipitous things sometimes happen on birthdays. Sitting on a rock by the water, within reach of the spray from a particularly gnarly looking rapid directly in front of us, I turned and saw an astronaut.

He was a rafter, dressed head to toe in a bright yellow rubber suit with a helmet and face guard and tools and ropes dangling from his life vest. He told us he had jumped out upstream to spot his mates through the rapids. We had plunked ourselves right in front of the scariest stretch of water in this part of the river: a hydraulic feature notorious for sucking down entire boats and holding them underwater. The spotter’s job was to stand on the shore by the hydraulic and throw a rope to anybody unlucky enough to end up in the drink.

The three of us watched as the raft closely hugged the far wall, staying as far from the hydraulic as possible. When they flew past, we let out a big whoop and the rafter ran back upstream to catch the next raft through while the first boat pulled up on the beach and a woman, in blue, took the spotter’s position with the rope. The second raft followed the same line and everybody whooped again.

Granite Rapids is rated an 8 out of 10 on the Grand Canyon scale.

Safe on shore, we chatted a bit. We were excited to see rafters and they were excited to see backpackers. They asked us where we’d come from and we pointed up to the cliffs more than 4,200 feet above; not bad for a day and a half’s work. Ready to get on their way, I gave them one of my Blonde Coyote business cards, telling them I’d be glad to send photos.

A few weeks after the Grand Canyon trip, I heard from Dan and Ann and sent them a few photos. In September, I heard from them again. Dan wanted to know if I’d be interested in housesitting their carbon-neutral home in northern Vermont for a few weeks over Thanksgiving. I have a policy about saying yes to any and all opportunities so this week, I’m heading north to Vermont! You never know who you’re going to meet out there. It’s true what they say: paths that cross, cross again. Stay tuned! 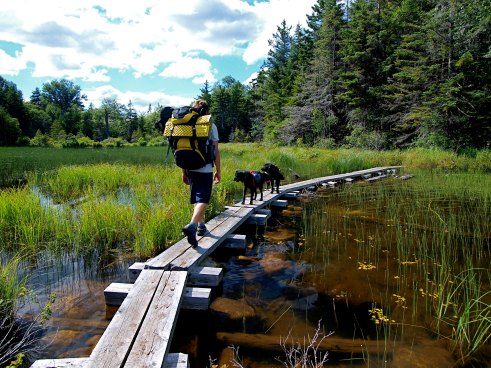 My last trip to Vermont: a 5-day backpacking trip with my brother on the Appalachian Trail. Paul and the dogs crossing Stratton Pond.

Mary Caperton Morton is a freelance science and travel writer with degrees in biology and geology and a master’s in science writing. A regular contributor to EARTH magazine, where her favorite beat is the Travels in Geology column, she has also written for the anthologies Best Women's Travel Writing 2010 and Best Travel Writing 2011. Mary is currently based in western Colorado. When she’s not at the computer she can usually be found outside -- hiking, skiing, climbing mountains and taking photographs. Visit her website at www.marycapertonmorton.com.
View all posts by theblondecoyote →
This entry was posted in Appalachian Trail, Bowie & D.O.G., Hiking!, Photography, Road tripping!, Uncategorized, Vagabonding 101 and tagged Colorado River, grand canyon, housesitting, rafting, Vermont. Bookmark the permalink.