The Weight of Water

Posted on January 8, 2013 by theblondecoyote

In an effort to raise awareness about water conservation among visitors to the Land of Enchantment, the Santa Fe Watershed Association and HospitalityGreen have asked me to pen a series of essays about my experiences living off rainwater in the New Mexican desert. Here is my first of four essays, the Weight of Water:

Water weighs 8 pounds per gallon. If that doesn’t sound heavy, you’ve never been hiking in the desert with a day’s worth of drink on your back. I grew up in the Appalachian Mountains, but I didn’t learn the weight of water until I moved to New Mexico, where water is rare and precious and worth its considerable weight in blue gold.

In New Mexico, I lived off the map, caretaking a place in the wide open deserts just south of Santa Fe. This place was more than a house. It was an Earthship: an off-grid passive solar adobe, adrift on acres of land. The house wasn’t connected to the outside world by wires or pipes, only a long dirt road. My power and my water both came from the sky and if I wanted to run out for milk, it was a two-hour round trip into town.

The Road to Town. Santa Fe is hiding behind the Cerrillos Hills.

The Earthship was an isolated place, but it afforded rare freedoms. Out there, I could hike in any direction to the horizon, down endless paths across open country. Between the trails, the place was wild, undulating madly in plunging arroyos and tilted sandstone. On foot, my favorite way to travel, it was a tremendous, uncharted place.

As well as I came to know the landscape around me – its contours and secrets – so I came to know myself: I knew exactly how much electricity I burned in a day, how much water I let drain in a shower, how quickly I went through a bag of beans, how long I could go before I pined for town, for Santa Fe’s bright colors, its rush of voices, the thrill of a menu, a taste of the outside world. Often, weeks would pass without wanting to be anywhere but out there in all that free open space. 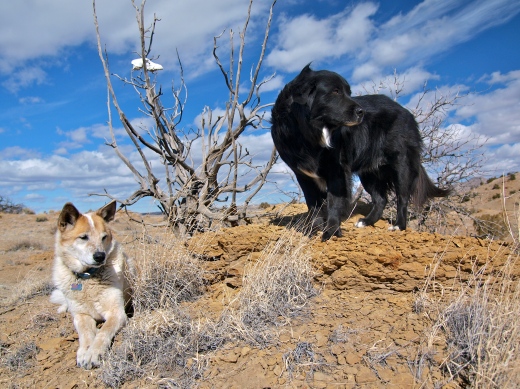 Desert Treasure: The Blonde Coyote & Bowie with the coyote skull I found wedged in a dead juniper tree.

Living in such a wild, remote place has its challenges, the greatest of which was the lack of free-flowing water. The Earthship had no water source – no water lines, no well – other than the sky. The building’s metal roof could collect hundreds of gallons of water during a good rain, the water gushing noisily through the gutters into two 1500-gallon water cisterns buried beneath the house.

Of course it doesn’t rain much in New Mexico, on average less than twelve inches per year, mostly in late summer (this year, so far, has loosed less than six). During dry spells I called Joe, a Navajo with a big red truck that dragged an old wheeled water tank. Joe charged $40, cash, for 400 gallons of water, delivered. I mostly used the cistern water for the Earthship’s sinks and shower – the grey water that flowed down the drains went out to water the plants and to fill the toilet – and bought drinking water in 5-gallon reusable jugs. On average, I used around 50 gallons of water a week. The average American household drains more than 350 gallons of water a day. 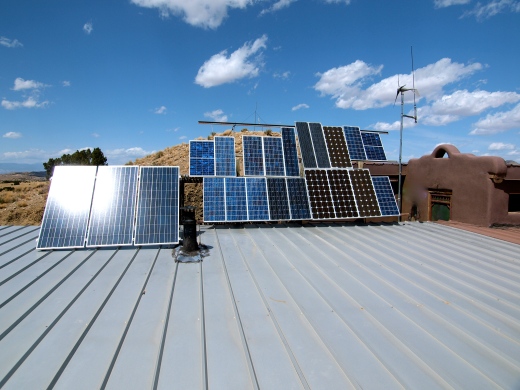 On three occasions, twice my first winter and once last year, I turned on the tap and nothing came out. That was when I learned the true weight of water. When nothing comes out of the tap but a desperate gurgling noise, the weight of water is crushing. Suddenly, four walls, a roof, and plenty of food all mean nothing. Without water, you have no home. In the desert, without water, you have nothing. 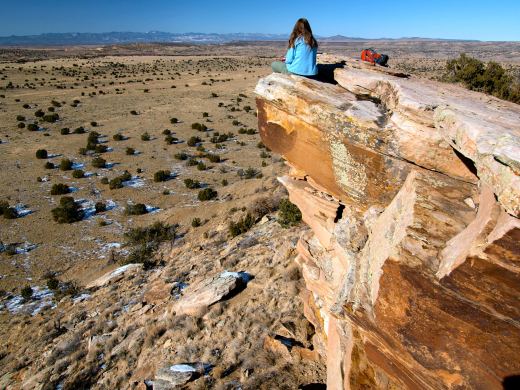 Visitors to Santa Fe seldom know the weight of water, but they’ll soon memorize those ubiquitous signs above every sink in the city: Water is a finite resource, please conserve.

What effect the signs have on people, as they stand at the sink, washing their hands, brushing their teeth, I don’t know. What effect they have once people go home, to places richer in water than New Mexico, is even less certain. I know when I stand at a sink where the water flows free, I am thankful for every drop. Perhaps every now and then, taps in Santa Fe should run dry with an empty, ominous gurgle. Then perhaps more people would feel, know and remember the true weight of water.

I have been away from the Earthship’s extreme asceticism for nearly nine months now, enjoying a winter back east, closer to my roots. But even here, the sound of rain on the roof in the middle of the night is enough to jolt me out of a deep sleep, anxious to check the gutters on the (now nonexistent) rainwater collection system. Every time I turn on the tap and water flows freely, I think of the desert and the awful, crushing desperation of running out. I hope I will feel the weight of water for the rest of my life.

This essay appeared last week on HospitalityGreen’s blog. Over the next 12 months, HospitalityGreen LLC, a New York-based firm specializing in environmental and operations consulting services and founder of the nationally recognized Green Concierge Certification program, will provide technical assistance, green team training and customized coaching free of charge to 15 lodging providers in Santa Fe in an effort to encourage better water conservation and reduce the amount of chemicals and other pollutants released into the environment. Read more  about the initiative here.

Mary Caperton Morton is a freelance science and travel writer with degrees in biology and geology and a master’s in science writing. A regular contributor to EARTH magazine, where her favorite beat is the Travels in Geology column, she has also written for the anthologies Best Women's Travel Writing 2010 and Best Travel Writing 2011. Mary is currently based in Big Sky, Montana. When she’s not at the computer she can usually be found outside -- hiking, skiing, climbing mountains and taking photographs. Visit her website at www.marycapertonmorton.com.
View all posts by theblondecoyote →
This entry was posted in Hiking!, New Mexico, Photography, Sustainable Living, Uncategorized. Bookmark the permalink.

95 Responses to The Weight of Water