Posted on February 27, 2013 by theblondecoyote 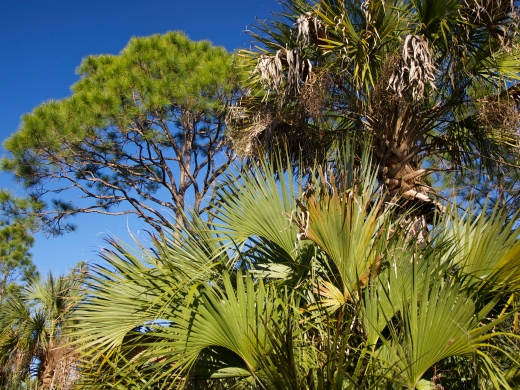 As a horse-crazy kid, I was obsessed with the Black Stallion books. One of these, the spooky Black Stallion’s Ghost, takes place in a creepy, haunted version of the Florida Everglades and I’ve been a little uneasy about the place ever since. Last time I drove to south Florida, on a Christmas break road trip my junior year of college, we planned to camp, but totally chickened out on account of the alligators and ended up spending a very uncomfortable night in my little VW.

Last summer, I tackled my alligator fears by taking gator wrestling lessons and on this trip, we had great fun sizing up the beasts, secretly hoping for some kind of small to mid-sized alligator emergency that might require our badass wrangling skills. But my general unease about the Everglades still haunted me; I am not comfortable in this place. I blame the early influence of the Black Stallion’s Ghost.

We spent our first night in south Florida camping in Picayune Strand State Forest, a curious place across Alligator Alley from the Florida Panther Wildlife Refuge. In the 1960’s a developer called the Gulf American Land Corporation purchased nearly 60,000 acres of densely forested swampland here in hopes of turning it into “Golden Gate Estates” the largest subdivision in the U.S., with a projected population of 400,000 people.

In a few years, more than 880 miles of gravel roads and 180 miles of canals were laid out in a vast grid of 1.5 and 2.5 acre lots. But the place proved uninhabitable. What looked like a jungle in the winter turned into swampland in the summer, overrun with mosquitoes. Golden Gate Estates went bankrupt, but not before it sold 30,000 lots to unsuspecting buyers.

One of the many abandoned roads through the Picayune Strand. Would you want to build a house here?

In the 1970’s Golden Gate Estates’ abandoned roads, particularly Everglades Boulevard, were used as clandestine landing strips for small planes loaded with drugs from Mexico and South America and the place developed a reputation for swallowing bullet-riddled bodies. In 1985, the “Save Our Everglades” conservation program hatched an ambitious, $25 million dollar plan to purchase vacant lots from 17,000 landowners to create a wildlife sanctuary. By 2006, the mission was completed and Picayune Strand State Forest was born.

We spent a chilly night at the trailhead for the Belle Mead Horse Trail and set out in the morning for a hike. The sandy path took us through the incredibly dense jungle. No wonder wildlife biologists spent months trying to track Florida panthers here and found only ghostly footprints and no actual cats. About 100 panthers still live in south Florida, but they’re rarely seen. You could pass within a few feet of an elephant here and never know.

At one point on our hike, I reached into my pocket and realized I had dropped the marginally useful map I had picked up at the trailhead. We turned around, retraced our steps and found it lying on the trail, but those moments felt a bit like treading water in the open sea. If you got lost here, you’d have a hell of a time getting found.

Trail marker in Picayune Strand. If you lost the path, you would have a snowball’s chance in hell of finding it again.

Back in the car, the adventure continued. According to the map, we didn’t have to leave the park the same way we had come in. We could follow the main gravel road west, towards highway 951 and come out near Naples. Soon we found ourself in a maze of unmarked roads, most of which were dead ends. Every now and then we’d pass full garbage cans at the end of a driveway. Incredibly, a few of the lots are inhabited!

Eventually we crossed the infamous Everglades Boulevard, the name faintly spray painted on the ground and turned west, towards Naples. But the road quickly went from bad to worse, rough and rutted, with a tangle of unmarked intersections, each route less promising than the last. Clutching the all but useless black and white map we had picked up at a kiosk at the entrance to the park the night before, I guessed at each intersection, steering us vaguely west. My sense of dread sloshed in the bottom our nearly empty water jugs: the campground didn’t have water and we were low. If we got stranded, we’d have a thirsty hike to help. And then, all of a sudden, we were out, emerging into the bright white light of Naples, one of the ritziest cities in South Florida. That’s Florida for you: land of contrast!

Stay tuned for tons of pix from Everglades National Park!

Mary Caperton Morton is a freelance science and travel writer with degrees in biology and geology and a master’s in science writing. A regular contributor to EARTH magazine, where her favorite beat is the Travels in Geology column, she has also written for the anthologies Best Women's Travel Writing 2010 and Best Travel Writing 2011. Mary is currently based in Big Sky, Montana. When she’s not at the computer she can usually be found outside -- hiking, skiing, climbing mountains and taking photographs. Visit her website at www.marycapertonmorton.com.
View all posts by theblondecoyote →
This entry was posted in Bowie & D.O.G., Hiking!, Photography, Road tripping!, Sustainable Living, Uncategorized, Vagabonding 101 and tagged Florida Everglades, Florida Panther, Golden Gate Estates, Picayune Strand. Bookmark the permalink.

18 Responses to Everglades, Part 1: Nearly Stranded in the Picayune Strand