Earth Day in the Garden of the Gods

It should come as no surprise that Earth Day is my favorite holiday. These last couple of years I seem to be working on an Earth Day tradition: exploring New Mexico’s bizarre and beautiful rocks! Last year, I took a friend to Tent Rocks and this year, I spent the afternoon in the Garden of the Gods. Knowing the nature of New Mexico’s wild rocks – Tea Kettle Rock, the Ojito Wilderness, Tres Piedras, to name just three –  I could probably keep up with this theme for many years to come! 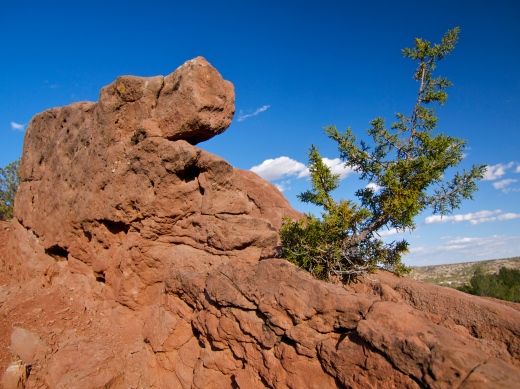 The name Garden of the Gods is not hyperbole. This place is a geologic wonder. Massive 40-foot high fins of Dakota Sandstone rise up from the crust, trending north-south. These thick slabs of white, yellow and pink sandstone were formed long before the dinosaurs roamed, when this region of the world was covered by an inland shallow sea. Around 27 million years ago, during the uplifting of the Sangre de Cristo mountain range, these layers were broken apart into slabs and stood vertically. 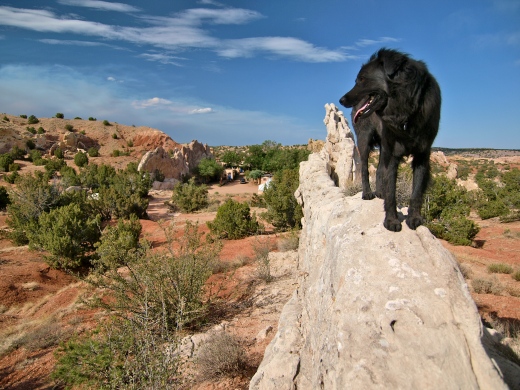 Garden of the Gods D.O.G.

The fins in this big backyard are exposed sections of what’s known as the Dakota Wall formation, which runs along the eastern roots of the Rockies,  surfacing at the spectacular Garden of the Gods in Colorado Springs and again, further north, at the Flatirons near Boulder, Colorado.

Less than a mile south of here, the Dakota Wall cuts through the water table of the Galisteo River basin. Flowing underground along the rocks, water naturally pools in the aquifer beneath the Garden of the Gods, making this place an oasis. People have been coming here for thousands of years to marvel at these rocks, seeking the miracle of water in the desert and on this day, Earth Day, I was lucky enough to find a shard of their history. 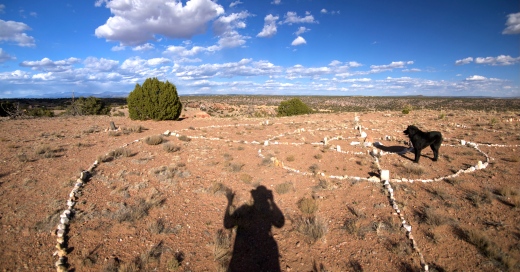 This is modern: Medicine Wheel Self-Portrait

This is ancient: A shard of pottery left by the Anasazi.

Garden of the Gods is geologic proof that connections on this Earth – between New Mexico and Colorado, between here and there, between then and now – run deep, occasionally surfacing where we can seem them, if we go looking. Here’s to seeing more of the world!

Mary Caperton Morton is a freelance science and travel writer with degrees in biology and geology and a master’s in science writing. A regular contributor to EARTH magazine, where her favorite beat is the Travels in Geology column, she has also written for the anthologies Best Women's Travel Writing 2010 and Best Travel Writing 2011. Mary is currently based in Big Sky, Montana. When she’s not at the computer she can usually be found outside -- hiking, skiing, climbing mountains and taking photographs. Visit her website at www.marycapertonmorton.com.
View all posts by theblondecoyote →
This entry was posted in Bowie & D.O.G., Hiking!, New Mexico, Photography, Uncategorized and tagged Anasazi pottery, Earth Day, Garden of the Gods. Bookmark the permalink.

10 Responses to Earth Day in the Garden of the Gods