Posted on December 11, 2013 by theblondecoyote

In 2008, on a mountaineering blitz in Ecuador, I discovered I have a gift for traveling at high altitude and since that trip, I have climbed many big mountains. I spent most of this past summer above treeline, hiking up 14’ers in southern Colorado. After one last effort up the highest mountain in the Rockies, I flew to Ireland and Scotland, where the mountains are beautiful and burly, but not very high. Topping out at 4,000 feet, I was drunk on oxygen.

Now back in New Mexico for the winter, I decided it was time to get back on the high altitude horse. When my friend Richard, whom I met in June on West Spanish Peak in Colorado, posted that he was heading up Santa Fe Baldy, the highest mountain in the Sangre de Cristo range above Santa Fe, I asked if I could tag along.

Good morning, Pecos. My alarm went off at 5am, I drove to the trailhead in the dark and started hiking at first light. That’s what we call an alpine start. Summit by 1pm, down by dark.

Richard and his climbing friend Steve are Mountain Men: Richard has climbed 48 of Colorado’s 58 14’ers (mountains above 14,000 feet) and he summited Mount Rainier this summer. His friend Steve has been running up and down mountains for months, training to climb Aconcagua, the highest mountain in South America, in January. 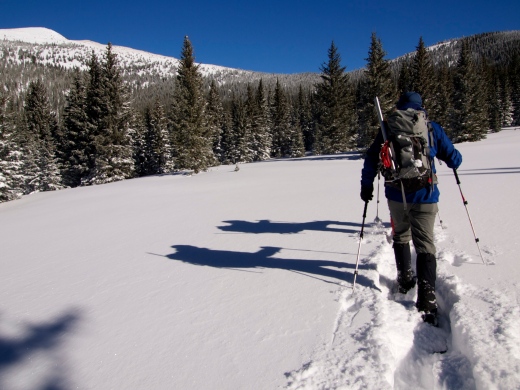 Mountaineer Shadows, heading for Baldy on the left

Of course, I was a little worried about being able to keep up with those guys on snowshoes over 14 miles of deep snow up to 12,622 feet – I haven’t worn snowshoes in two years and I haven’t been at altitude since August – but I believe in my capabilities. My secret weapon, the one I’ve honed as sharply as my legs and lungs, is my heart: I love a good rare air suffer fest. The key to keeping up in the mountains is to convince yourself you really are having fun.

Accidental shot of me & Baldy. I’m cold and tired and in pain and I still have to go all the way up to that peak, but I’m still smiling. Nowhere I’d rather be!

Into the woods. The trail was hidden under several feet of snow so we had to blaze our own way through the woods up to the saddle. 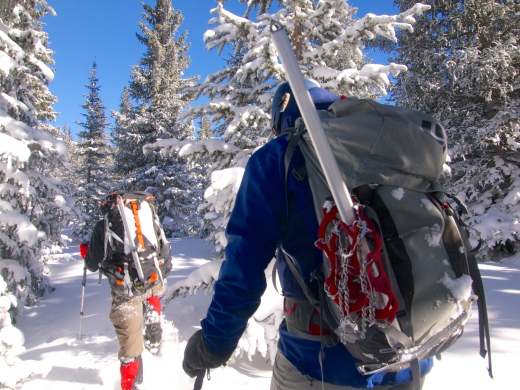 Snowshoeing off-trail uphill in deep snow is hard work. Steve is training to climb Aconcagua in a month so we let him break trail. He also has about 50 pounds of water in his pack…

We didn’t have a trail to follow but we still ended up exactly where we needed to be. We’re heading for the right hand bump on that ridge line. What’s with the glove on the sign? I dunno.

The start of the great snowshoes on/ snowshoes off debate. They left theirs on, I took mine off and we all made it up to the very top. To each their own in the mountains.

Richard on the summit ridge. The high point is on the right. 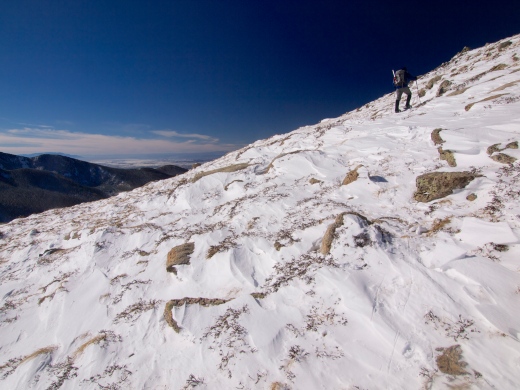 Wind-blown Snow Sculptures on the summit ridge. Totally worth the frozen face!

Final push to the summit. Except for the biting wind, this was the easiest part of the ridge.

My Summit Shot. Thanks, Richard!

I can see my house from here! Not really, but I can see Baldy from my house.

Departing the summit. Too cold to linger for long!

The descent was steep enough to warrant microspikes and an ice axe. Wouldn’t want to go skidding down this slope!

Back down to treeline

Baldy was a beast, but I kept up with the mountain men all the way up to the summit and all the way back down again, despite a pissed off hip flexor that raged every time I lifted my left leg. Damn snowshoes. My water bottles and my camera lens froze, not to mention my face, fingers and toes. But it was all in good fun. On the way down, Richard asked me if I thought Baldy qualified as a “Suffer Fest” I said, nah, just a Tired Fest. What a strange idea of fun we mountaineers have!

The Way Back, On the Windsor Trail

Now I’ve checked off yet another high point on my horizon! I can see Baldy from my house and looking up at that cold, white mountain, I can’t quite believe I stood on top of it! Check out my previous High Points On My Horizons posts: Wheeler Peak, Camel’s Hump, Arthur’s Seat, and Cabezon Peak. Next up: Tetilla Peak!

Mary Caperton Morton is a freelance science and travel writer with degrees in biology and geology and a master’s in science writing. A regular contributor to EARTH magazine, where her favorite beat is the Travels in Geology column, she has also written for the anthologies Best Women's Travel Writing 2010 and Best Travel Writing 2011. Mary is currently based in Big Sky, Montana. When she’s not at the computer she can usually be found outside -- hiking, skiing, climbing mountains and taking photographs. Visit her website at www.marycapertonmorton.com.
View all posts by theblondecoyote →
This entry was posted in Hiking!, New Mexico, Photography, Uncategorized, Vagabonding 101 and tagged Santa Fe Baldy. Bookmark the permalink.

15 Responses to High Points On My Horizon: Santa Fe Baldy