Where Warm Waters Halt…On the Trail of Treasure in the Rocky Mountains!

Posted on February 16, 2015 by theblondecoyote 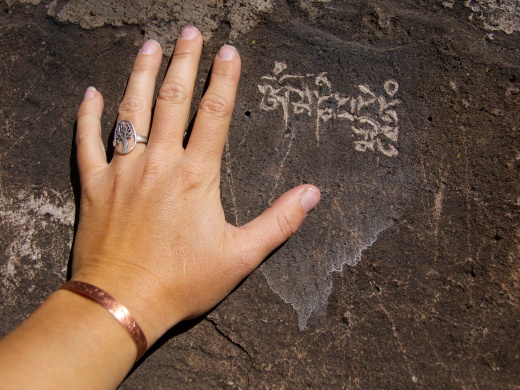 A “blaze” I found in the Rio Grande Gorge in northern New Mexico last spring.

In 2010, Forrest Fenn, a retired antiquities dealer based in Santa Fe, N.M., set about creating his own legend: He bought an antique bronze chest and filled it with valuables and artifacts including gold dust, coins and nuggets, Chinese jade carvings, a 17th-century gold-and-emerald ring, an ancient turquoise bracelet — together worth between $1 million and $2 million — and then lugged all 19 kilograms of it to a mysterious hiding place somewhere “in the Rocky Mountains north of Santa Fe.” He then released a poem containing nine clues as to the treasure’s whereabouts. More than four years later, nobody has yet found Fenn’s treasure, and he maintains that if it goes undiscovered, the chest will stay safely in place for hundreds of years.

The Fenn treasure has been valued between $1 million and $2 million and the chest itself — a 12th-century Roman lockbox made of sculpted bronze — has been said to be worth about $35,000. Credit: Forrest Fenn.

Thousands of people from all walks of life have gone searching for Fenn’s treasure in New Mexico, Colorado, Wyoming and Montana (Fenn has eliminated Utah and Idaho). When I heard about the treasure, I couldn’t help thinking about it from a geologist’s point of view: The poem implies that the treasure is hidden near water, but the courses of waterways can change drastically over time, even from season to season, let alone over centuries. And as someone interested in archaeology and paleontology, I’m well aware that if you find something interesting on public land, it’s not always “finders, keepers.” I was intrigued. Could I put my background in geology and my hiker’s knowledge of landscapes to work searching for a treasure chest?

Follow my treasure hunt here in my latest feature for EARTH magazine!

Mary Caperton Morton is a freelance science and travel writer with degrees in biology and geology and a master’s in science writing. A regular contributor to EARTH magazine, where her favorite beat is the Travels in Geology column, she has also written for the anthologies Best Women's Travel Writing 2010 and Best Travel Writing 2011. Mary is currently based in Big Sky, Montana. When she’s not at the computer she can usually be found outside -- hiking, skiing, climbing mountains and taking photographs. Visit her website at www.marycapertonmorton.com.
View all posts by theblondecoyote →
This entry was posted in Hiking!, New Mexico, Photography, Road tripping!, Science Writing, Sustainable Living, Vagabonding 101. Bookmark the permalink.

14 Responses to Where Warm Waters Halt…On the Trail of Treasure in the Rocky Mountains!