In a landscape littered with bizarre sandstone formations, the Wave on the border between Utah and Arizona stands out as downright psychedelic. Here colorful petrified sand dunes have been sculpted into undulating waves, photographs of which are so coveted that the park service has imposed a unique permit lottery system to keep the delicate site from being overrun with snap-happy tourists.

My book Aerial Geology:A High Altitude Tour of North America’s Spectacular Volcanoes, Canyons, Glaciers, Lakes, Craters and Peaks highlights 100 geologic features across Canada, the U.S. and Mexico. As of this spring, I had visited 89 out of 100 but after my lucky lotto ball came up on Memorial Day weekend, I’ve now been to 90!

The Wave is located within the Coyote Buttes area of Pariah Canyon– Vermillion Cliffs Wilderness, near the bottom of the Grand Staircase that descends through canyon country from Brian Head down to the Grand Canyon. Hidden in the backcountry several miles from the nearest rough dirt road, the Wave was virtually unknown until the 1990’s when it was featured in German travel brochures of the American Southwest and in the 1996 German nature documentary, Fascination Natur. Popularity among Europeans soared and the site soon became one of the most sought-after photos for foreign travelers visiting the U.S. 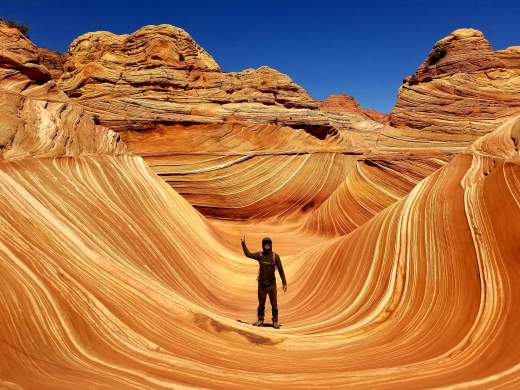 To visit the Wave, you must win the lottery. Only 20 people per day are allowed to visit the site. Ten permits are awarded through an online lottery, months ahead of time and ten permits are given out the day prior at the Grand Staircase-Escalante Visitor Center in Kanab, Utah. During the summer, over a hundred people a day vie for these ten permits.

We happened through Kanab, Utah on Memorial Day weekend and played the Wave permit lottery two days in a row. The first day about 150 people were vying for the 10 permits. The first lottery ball pulled was for a group of 6 and the second went to a group of 4 and it was all over in two minutes. On day two, we arrived at 8:58 local time, just in time to submit a permit application. When Ranger Ron read off everybody’s lottery ball number, he called “Morton number 47” and I knew I was going to the Wave… 47 is one of my luckiest numbers! Sure enough, the third ball he pulled was #47!

That night we camped down House Rock Road and set off before dawn the next morning for the Wave. The park service provides a photo map of the route to the formation; the trail is not marked and much of it flows over slickrock that doesn’t save footprints. I was surprised by the highly difficult routefinding! Dan and I are very experienced off-trail desert hikers and even we got a little sidetracked on our way to the Wave. In the photo below, we are almost there; the Wave is tucked behind the cones of rock in the middle ground.

We were the first to arrive and had the place to ourselves for about an hour. Then we left to scramble up the rocks behind the Wave to overlook the formation. As I say in my book: Geology is best appreciated from above! The Wave appears just above the tips of my boots in the photo below. 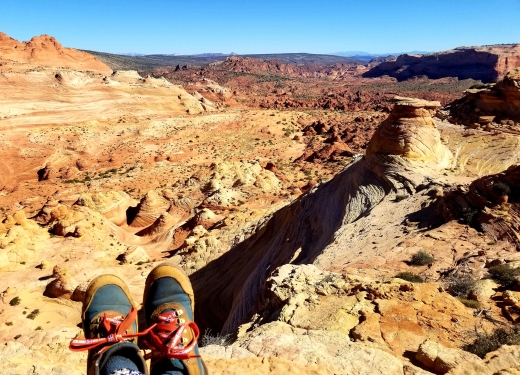 From Aerial Geology: During the Jurassic period, when dinosaurs ruled the Earth, this part of Arizona was buried under a massive sand dune field. Periodic changes in the direction of the prevailing winds led to cross bedding of the layers of sand as the dunes migrated across the landscape. Over time, these layers were lithified into bright orange Navajo sandstone more than 1,200 feet thick.

The thin ridges and ripples preserved at the Wave are evidence of millions of years of shifting wind patterns. Technically called wind ripple laminae, these lines are part of what make the Wave so photogenic. From the air, these lines highlight the now frozen movement of these ancient dunes. The nearby checkerboard patterns are created by freeze and thaw weathering of the petrified dunes, resulting in crosshatching of the sandstone. Dinosaur footprints have also been identified in the rocks near the Wave, relics from ancient travels across the dunes.

As amazing as the Wave itself is, the surrounding sandstone wonderland of North Coyote Buttes calls me back. Within a 1-mile radius of the Wave we found a field of Moki Marbles: tiny iron balls that form when iron-rich sandstone is leeched by groundwater over geologic time. The iron balls are very heavy and tend to roll downhill and collect in pockets. 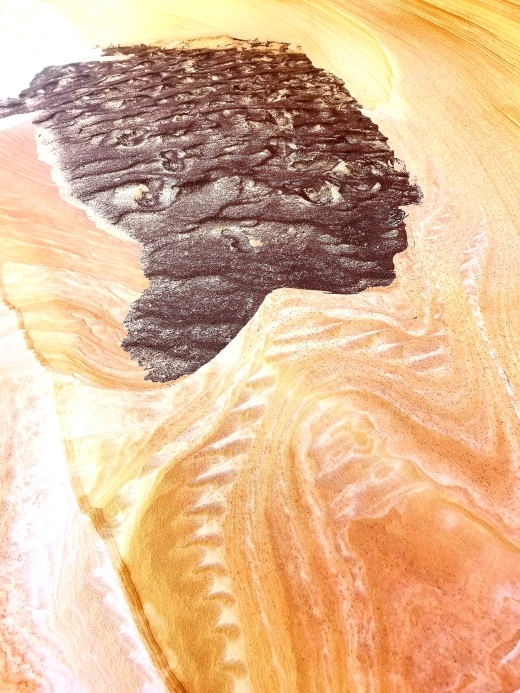 …As well as several sandy coves that have been carved out of the rock by swirling wind and flying grit…. 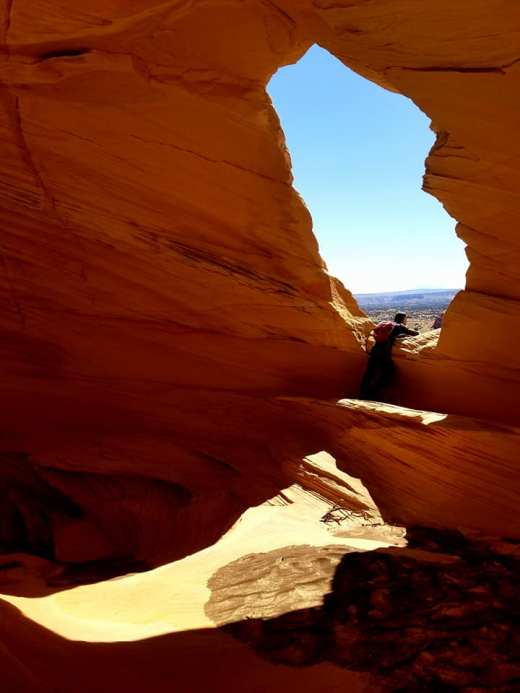 ….And a slickrock slot canyon!

May the Southwest wonders never cease!

Heading north from the Wave via Cottonwood Road through Grand Staircase-Escalante National Monument.

To See More of the World, including the Wave and 99 other geologic formations, you can order a signed copy of Aerial Geology direct from me for $34.99 plus $5.00 shipping via Paypal:

Mary Caperton Morton is a freelance science and travel writer with degrees in biology and geology and a master’s in science writing. A regular contributor to EARTH magazine, where her favorite beat is the Travels in Geology column, she has also written for the anthologies Best Women's Travel Writing 2010 and Best Travel Writing 2011. Mary is currently based in Big Sky, Montana. When she’s not at the computer she can usually be found outside -- hiking, skiing, climbing mountains and taking photographs. Visit her website at www.marycapertonmorton.com.
View all posts by theblondecoyote →
This entry was posted in Uncategorized. Bookmark the permalink.

9 Responses to Aerial Geology: The Wave!