7 Hours in LA: Best layover ever

Posted on December 26, 2011 by theblondecoyote 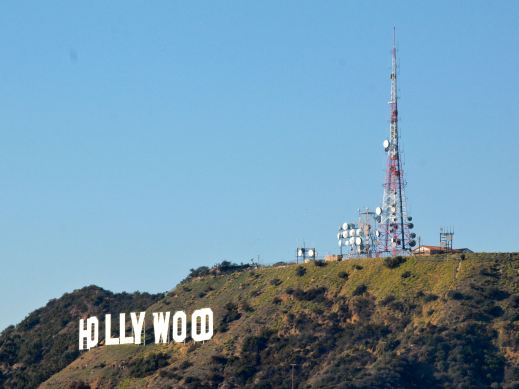 I have a knack for finding cheap plane tickets (kayak rarely lets me down) but low prices often mean inconvenient departure and arrival times and long layovers. My plane ticket from Albuquerque to Zurich was less than $600, but the catch was a 7-hour layover at LAX on Christmas Eve.

Instead of walking laps around the airport for 7 hours, my California friend Drew picked me up and we went for a hike in the Hollywood Hills. Turns out you can’t actually hike up to the Hollywood sign, but we picked a trail with a good view: Mount Hollywood Hiking Trail in Griffith Park. 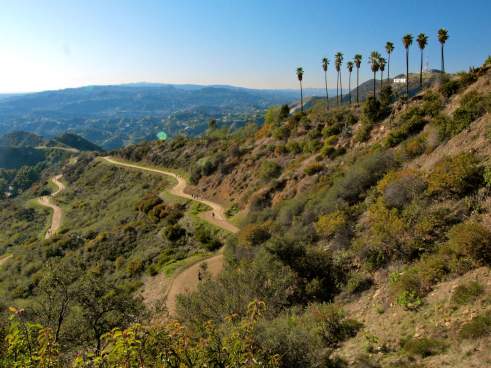 Mount Hollywood Trail. The sign is visible through the palm trees.

The original, 30-foot tall Hollywood letters were erected in 1923 as part of an ad campaign for a housing development called Hollywoodland. The “Land” letters were removed in 1949 and the sign, never intended to be permanent, became increasingly dilapidated until 1978, when shock rocker Alice Cooper donated a new “O” and led a campaign to replace the remaining letters with larger steel letters.

Today, the sign is maintained by the Hollywood Sign Trust and heavily guarded by the LAPD. Chain link and barbed wires fences surround the sign and motion sensor cameras alert authorities to any movement around the signs. Supposedly, this somewhat extreme security system was necessitated by vandalism and injuries incurred by people trying to reach the letters, which sit on exceptionally steep terrain near the summit of the Santa Monica Mountains.

Since we weren’t looking to tangle with the LAPD, Drew and I parked near the Griffith Park Observatory and hiked to a great vantage of the sign. This was my first trip to Los Angeles and I was really impressed by the terrain. I could do some real hiking in those mountains! We even saw people on horseback. Who knew LA was so rugged?

Horses in the Hollywood Hills

Once we got back to the car, I still had a couple of hours before I had to be back at the airport (leaving 2 hours to go back through security), so we headed for the beach. Looking at Drew’s Adventure Atlas (I’ve outfitted most of my friends with this invaluable and unmatched road tripping tool) the Santa Monica Pier was most convenient to the airport.

Rides Over the Santa Monica Pier

We had just enough time to wander down the pier, hear a lovely rendition of Knocking on Heaven’s Door by an old school busker, trespass among the pylons and see most of sunset over the Pacific before we high-tailed it back to LAX. Between the rides, the souvenirs, the music, the pier artists and the food – funnel cake and meat on a stick – the Santa Monica Pier was probably the most delightfully, obnoxiously full-blooded American place I could visit before boarding a plane to Europe. It was perfect. 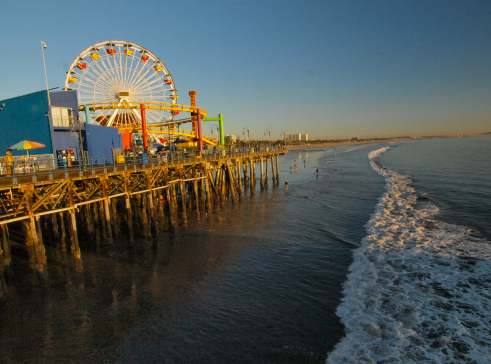 The Pacific Meets the Pier

Here’s another advantage to traveling on a major holiday: the airport was all but deserted and I was the only person going through security. No lines at all. Pretty sure that doesn’t happen everyday at LAX!

I’m now on the other side of another ocean in Freiburg, Germany, recovering from today’s 5-hour bike ride through the countryside to the Black Forest. Stay tuned for several European editions of the Blonde Coyote!

Mary Caperton Morton is a freelance science and travel writer with degrees in biology and geology and a master’s in science writing. A regular contributor to EARTH magazine, where her favorite beat is the Travels in Geology column, she has also written for the anthologies Best Women's Travel Writing 2010 and Best Travel Writing 2011. Mary is currently based in western Colorado. When she’s not at the computer she can usually be found outside -- hiking, skiing, climbing mountains and taking photographs. Visit her website at www.marycapertonmorton.com.
View all posts by theblondecoyote →
This entry was posted in Hiking!, Photography, Uncategorized, Vagabonding 101. Bookmark the permalink.

1 Response to 7 Hours in LA: Best layover ever