Posted on February 13, 2012 by theblondecoyote

Next week, I’ll be turning 30 and I feel fantastic about it. In part, I’m excited because I’ll be celebrating my birthday on a 5-day backpacking trip through the Grand Canyon, but I also truly believe my 20-year old self would be proud of me at 30: I’m doing exactly what I want to be doing and living exactly the kind life I want to be living.

My 20’s were awesome: After graduating college with degrees in biology and geology, I packed my dog, my hiking boots, and a trunk load of books and hit the road West. That summer, I put 7,000 miles on my car, and several hundred on my boots, crossing the country, exploring the land, not in terms of textbooks, states and highways but as Earth, Sky and everything that lives in between.

At the end of the summer, I landed in Oregon, where I spent the next year working on an organic seed farm and housesitting an off grid cabin in the woods. That year I pulled a lot of weeds, hiked a lot of miles and read a lot of books. One day, reading the Botany of Desire, I had an epiphany: Michael Pollan isn’t a scientist. He’s a writer who writes about science. The perfect path for me!

My Oregon Cabin in Spring

I applied to graduate programs in science writing, got into both my top choices, road tripped back across the country and spent a year living in Baltimore, earning my masters in science writing at Johns Hopkins. While I was still in school, I started writing for EARTH magazine and took up mountaineering on a life-changing trip to Ecuador.

Upon receiving my degree, I turned down a staff writing position at EARTH in favor of moving to New Mexico to freelance and housesit an off grid Earthship adrift in a desert I’d never seen. I packed my car and my dog and hit the back roads winding from Maryland to Savannah to New Orleans to the Land of Enchantment. They say when you know, you just know and when I rolled across the Texas state line into New Mexico, it was true, instant Love. 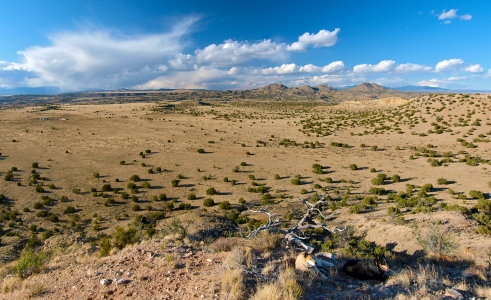 My Big Backyard is the Land of Enchantment

Four years later, I’m still making my living as a freelance writer, photographer and professional housesitter. Everything I own, including my two good dogs, fits in my car, and everything I really need fits in a 25-pound backpack. I don’t make much money, but I don’t need much money. I am rich in time and freedom and have zero debt, which is absolutely priceless.

With the exception of my year in Baltimore, I haven’t paid rent since college and I’ve lived in some incredible places: This is my third winter caretaking the Earthship. I’ve also lived in an empty mansion in Montana, a 200 year-old Cape on the coast of Maine, a one-room dune shack on Cape Cod, an Airstream next to a geologic wonder and of course, my beloved cabin.

When I set out on that first road trip, I didn’t know where I was going or where I would end up or what I would do when I got there. I had no idea I would find myself on the cusp of 30, writing a travel blog on a laptop, powered by rooftop solar panels, in an Earthship, surrounded by spectacularly rural New Mexico, planning an epic birthday trip to the Grand Canyon.

My path, often recklessly uncharted, has brought me to exactly the place I want to be at this point in my life. What more could I possibly wish for at 30?! From here, I have no idea where I’ll go – I’m thinking summer in Alaska! – but I trust I’m on the right track.

Me & Zion Valley from Angels Landing

Stay tuned for a whole series of Grand Canyon posts! I’m scheming one hell of a trip!

Mary Caperton Morton is a freelance science and travel writer with degrees in biology and geology and a master’s in science writing. A regular contributor to EARTH magazine, where her favorite beat is the Travels in Geology column, she has also written for the anthologies Best Women's Travel Writing 2010 and Best Travel Writing 2011. Mary is currently based in Big Sky, Montana. When she’s not at the computer she can usually be found outside -- hiking, skiing, climbing mountains and taking photographs. Visit her website at www.marycapertonmorton.com.
View all posts by theblondecoyote →
This entry was posted in Bowie & D.O.G., Hiking!, New Mexico, Photography, Road tripping!, Sustainable Living, Uncategorized, Vagabonding 101. Bookmark the permalink.