Posted on February 15, 2012 by theblondecoyote

The Gate to the BLM

Not far from my place is a tract of land owned by the Bureau of Land Management. BLM land is public land; it belongs to you and me. One eighth of the landmass of the United States is held by the BLM, more than 250 million acres where you’re free to hike, camp, shoot guns and run cattle. On BLM land, this is still a free country (unless you’re a mustang).

Yesterday, my Valentine was in California, so I set off for a hike by myself across the BLM with my two good dogs. Solitude and open spaces are the great loves of my life and there’s no other way I’d rather spend the day than hiking in a place like this:

This tract of land surrounds the Galisteo Dam, a flood control dam built in 1965 to hold back 100 year floods. As far as I know, they’ve never come, but there’s still plenty of time. A round trip hike to the dam is about 12-miles, a nice conditioning hike a week before my birthday Grand Canyon trip next week.

All day long, I saw not a single other person on my hike, but I did have a few animal encounters. On the way out and on the way back, I ran into a herd of a dozen cattle, all with curved, pointy horns. As usual, they took one look at me, flanked by my two big dogs, and turned tail.

Out here, even the girls have horns! Galisteo Dam in the background.

On one of the very first hikes I took out here, I came around a juniper and found myself much too close to one of the rangeland steers. Before I could retreat he ran straight at me, horns low. I had nowhere to go, nothing to do. And then he blew right past me, a reeking red and white freight train of death. I whirled with him and then saw the rest of the herd scattered behind me. I had come between the bull and his buddies and he had panicked to rejoin them.

As it turns out, rangeland cattle are skittish to the point of absurdity. From that day on they have always run from me, heads low in fright. Only with a long lens can I get decent pictures. It’s almost as if the delicious beasts know they’re destined to be food.

About halfway to the dam, I stopped for a rest on the edge of the flood plain, before beginning the climb. My young dog Dio was scenting intently to the south and a moment later, a coyote chorus exploded from a nearby bluff. Impossible to tell how many, but more than one or two. Then Dio’s head whipped to the north, towards the river, and I heard very faintly, a return chorus. We were in the middle of a pack.

No worries. They were just letting us know we’re on their turf. My dogs will stay with me, if I tell them to, and no number of coyotes would ever attack a person and two big dogs. We stay in the open, where we can see and be seen. I never catch a glimpse, but I feel coyote eyes on me the rest of the day.

Dio listening to the coyotes, Ortiz Mountains to the south

At the top of the dam, 500-feet above the flood plain, is a defunct picnic area. I’m not sure if it’s ever open; all the times I’ve been here in the winter the heavy metal gate across the road in from I-25 has been padlocked. There’s a fair amount of broken glass around, but the graffiti on the overlook has been painted over with a fresh coat of paint, much to my disappointment. I love graffiti. 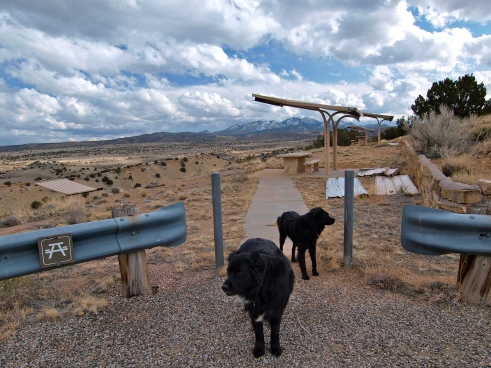 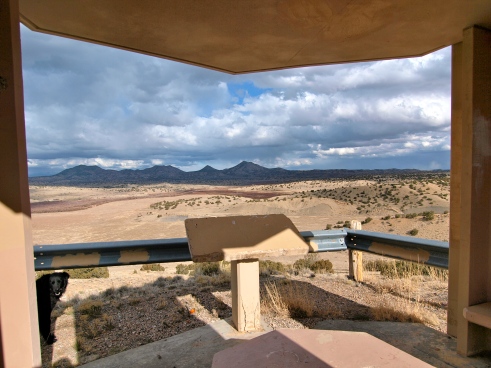 Cerrillos Hills from the Galisteo Dam

Standing at the top, on the edge of the dam, among bright red and pure white sandstone slabs – the red dotted with chartreuse lichen, the white decorated with delicate fossils of frozen grass – I finally see the need for the dam: The land below is rippled by giant flood waves…

View from the Dam

Mary Caperton Morton is a freelance science and travel writer with degrees in biology and geology and a master’s in science writing. A regular contributor to EARTH magazine, where her favorite beat is the Travels in Geology column, she has also written for the anthologies Best Women's Travel Writing 2010 and Best Travel Writing 2011. Mary is currently based in Big Sky, Montana. When she’s not at the computer she can usually be found outside -- hiking, skiing, climbing mountains and taking photographs. Visit her website at www.marycapertonmorton.com.
View all posts by theblondecoyote →
This entry was posted in Bowie & D.O.G., Cowboys & Horses, Hiking!, New Mexico, Photography, Vagabonding 101. Bookmark the permalink.