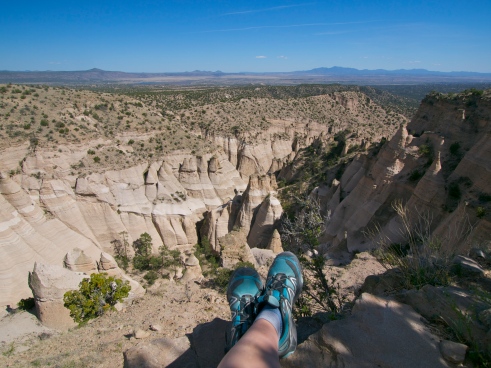 Self portrait with my new kicks at Tent Rocks!

Last week the Blonde Coyote was featured by WordPress as one of the best nature blogs for Earth Day! Quite a honor for me, since Earth Day is as close to a religious holiday as I get. Welcome to all my new subscribers! The meaning and mission of my life is to see as much of this Earth as possible and share it through the Blonde Coyote. Thank you all so much for reading and for all the amazing feedback! You guys make my world go ’round. 🙂

On Earth Day, I woke up at dawn, went outside and stayed out all day long, until sunset. What better way to celebrate than with my feet on the ground, the breeze in my face, and the sun in my eyes. I went for a morning hike around my old neighborhood in New Mexico and then took my friend Ashley for her first hike at Tent Rocks. 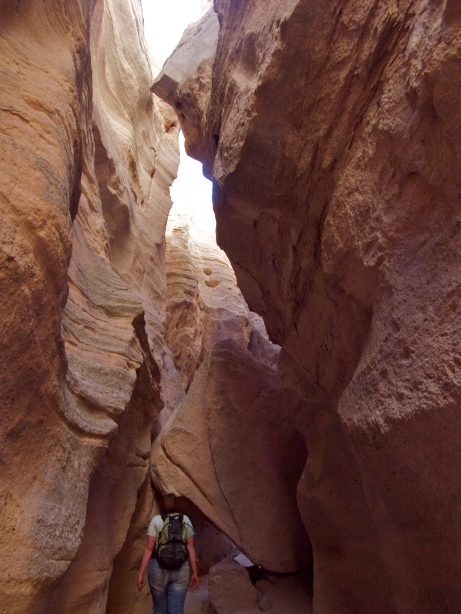 Slot canyons at Tent Rocks, a rare example of volcanic slot canyon, most are carved out of sandstone

Tent Rocks National Monument, less than an hour south of Santa Fe, New Mexico is one of my top five hikes of all time. This hike has everything you could want in a desert trek: slot canyons, wicked rock formations and incredible views. 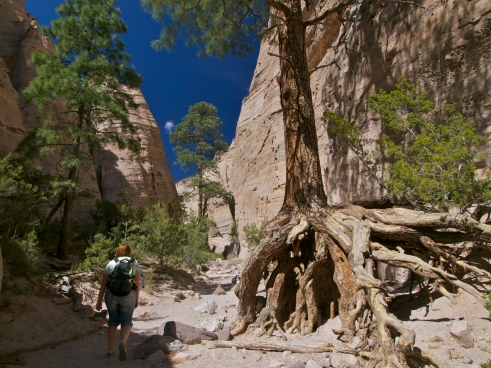 The first half of the trail winds through a slot canyon so narrow you can touch the walls on either side, then the canyon opens up beneath the 90-foot conical hoodoos that give this National Monument its name. Finally, the trail switchbacks up to the top of the mesa to an overlook of the slot canyon and tent rocks as well as sweeping views of the Rio Grande River Valley to the east and the Jemez Mountains to the west. 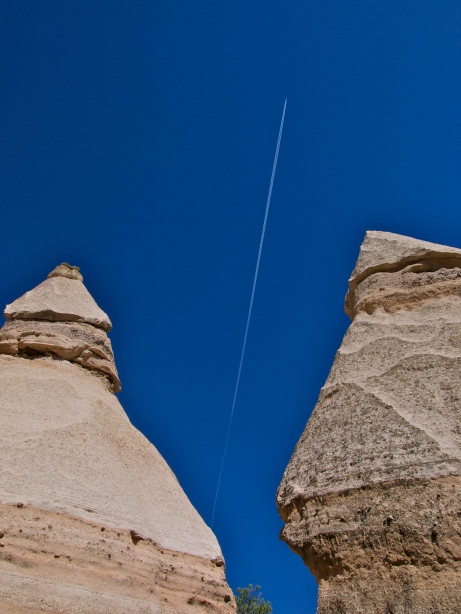 Tent Rocks Intruder! There's something to be said for places so quiet that a passing plane feels intrusive. This world needs more quiet places, and less planes.

I used to frequent Tent Rocks a lot more often back when the monument still allowed dogs. Since they closed it to pets in 2010, I’ve been back a handful of times to show it off to friends. Ashley, a fellow Earth-lover, declared it the second-best trail she’d ever seen. 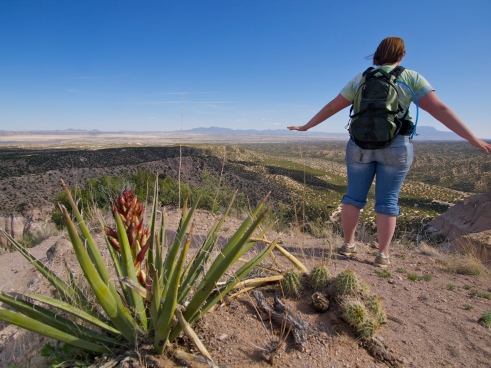 The slot canyons and hoodoos at Tent Rocks are formed from volcanic ash that blanketed this region of New Mexico in a series of explosive pyroclastic eruptions around 7 million years ago and then again between 1.6 and 1.25 million years ago. Over time the ash hardened into two formations: the older, finer Peralta tuff and younger, coarser Cochiti formations. 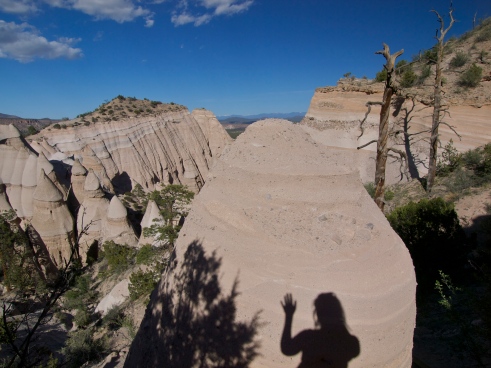 Tent Rocks Self Portrait, showing the layers in the tuff

Tent Rock’s volcanic tuff is quite crumbly and readily carved by wind, water and people. Differential weathering of the layers has produced the distinctive pointy hoodoos as well as the sinuous slot canyon. The 4-mile round trip hike also boasts a cave dwelling similar to the famous cliff caveats at Bandelier National Monument, just northwest of here. The caveats were carved by hand by the Ancestral Pueblo People between 1150 and 1600.

The last time I hiked this trail was in January, in the snow. This time Tent Rocks was blooming! Desert flowers may be few and far between, but each one is such a gift: a burst of color in a sea of sand and rock. All we’ve done to this Earth and it still just keeps on giving. To me, that’s Love. Happy Earth Day! 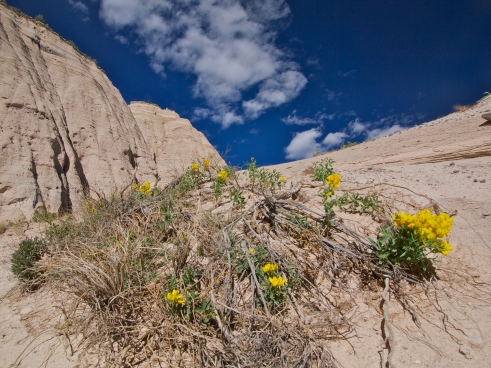 I had a few loose ends to tie up here in New Mexico, but now I’m on the road again, dogs in the backseat and the Teardrop in tow! Next up: Taos!

Mary Caperton Morton is a freelance science and travel writer with degrees in biology and geology and a master’s in science writing. A regular contributor to EARTH magazine, where her favorite beat is the Travels in Geology column, she has also written for the anthologies Best Women's Travel Writing 2010 and Best Travel Writing 2011. Mary is currently based in Big Sky, Montana. When she’s not at the computer she can usually be found outside -- hiking, skiing, climbing mountains and taking photographs. Visit her website at www.marycapertonmorton.com.
View all posts by theblondecoyote →
This entry was posted in Hiking!, New Mexico, Photography, Road tripping!. Bookmark the permalink.