Posted on September 2, 2012 by theblondecoyote

Last year, over the long Labor Day weekend, my friend Sarah and I and our three dogs hiked a four-day, 30-mile loop around Colorado’s Collegiate Peaks Wilderness. Now, I’m driving east and Sarah’s navigating the wilderness of New York City. My how time flies! That post is an oldie, but a goodie:

One of my very favorite things about hiking and climbing mountains is looking back from a high vantage and figuring out my route over the landscape. From the 14,196-foot summit of Mount Yale, we had a clear view of our trek, which in the photo above, follows from the green patch to the right of the cairn, up past the snowfields in the distance left of center, down into drainage behind the ridge with the snowfields and around to the far left to approach Yale. From this perspective, the measure of miles becomes obsolete. By my eye, that’s an incredible route to cover on foot and by that point, on the summit, we were only halfway home.

Our hike began on Friday, after meeting in Buena Vista, in the valley just east of the Collegiate Peaks. Sarah and I left one car at the Colorado Trail trailhead and began hiking from the North Cottonwood trailhead. We spent the first night 4 miles in at Kroenke Lake, below 12,749-foot Birthday Peak. After a clear night of epic stars we awoke to ice on the tent. Craving warmth, caffeine and coffee, Sarah was less than thrilled with me for leaving the stove behind to save pack weight. 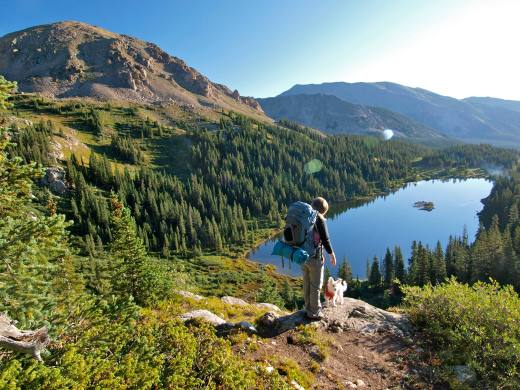 Sarah and Oliver above Kroenke Lake

On cold mornings, I’d rather just start walking to get warm. We packed the tent, pledging to stop later in the sun to thaw it out, and headed uphill, towards 12,500-foot Brown’s Pass, above the lake.

We passed treeline around 12,000 feet, hiking through alpine fields lush with the last of this year’s wildflowers and patches of stubborn snow.  Most of the way up, we thought the big mountain hulking to our left was Yale, but once on top of the pass, we saw that Yale was actually hiding behind that unnamed 13,605-foot peak.

It was here, consulting the topo map, that we realized we had to hike several thousand vertical feet down into the next drainage before climbing all the way back up to tackle Yale. I thought about following the ridge line from here up and over the 13K peak to Yale, but decided to stick with our plan to head down Brown’s Pass and climb up Yale from the Delaney Creek drainage. From here the off trail route looked doable and later from the summit it did too, but there’s always a chance we could have gotten cliffed out. Maybe I’ll try it on another trip…

Summit of Brown’s Pass, Yale peeking out above the lakes

We spent the morning hiking down the Brown’s Pass trail to Hartenstein Lake. When we got to the turnoff for the Yale trail, it was just before noon. Here we had a choice: head for Yale and risk afternoon weather on the peak or kill eight hours of daylight by the lake. At that point the sky was clear, but having already covered eight miles with several thousand feet of elevation gained and lost, we elected to chill out by the lake for the afternoon and head to Yale first thing the next morning. It turned out to be a good decision: by afternoon, the clear midday skies turned to clouds and light rain and while we never saw lightning, it would have been nerve-wracking and risky to be above tree line.

I’ve never had trouble passing time and in between napping, exploring, reading and talking, Sarah and I made a great day out of hanging out by Hartenstein Lake, enjoying the view of Mount Yale. The next morning, we were up in the pitch blackness before dawn to start our trek up Yale, hoping to get a jump on weather and holiday peak-bagging crowds. 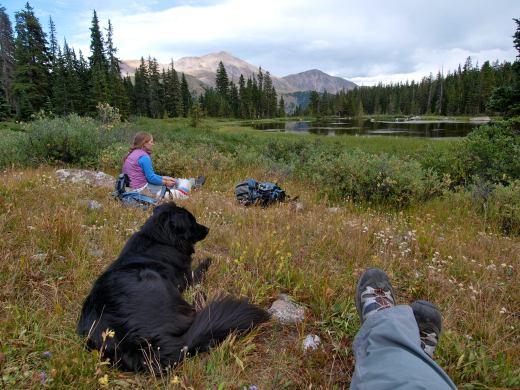 The Mount Yale trail up Delaney Creek is the most popular route up Yale and once we began climbing, we were in plentiful company. Everybody we saw – and it was incredible how many other people were on that mountain at the crack of dawn – was out for an out-and-back day hike. We were the only ones carrying full-sized backpacking packs up the mountain and several people asked if we were training for something. When we told them we were on a 4-day loop up and over Yale, comments ranged from “Way to go big!” to “I hope I don’t read about you guys on the news”. Apparently backpacking 14-ers is a little crazy, even by Colorado standards.

But Sarah and I are nothing if not ambitious. I hike just about everyday and Sarah was coming off another fourteener – Bierstadt – the weekend prior. Yale was a hell of a climb: nearly 5,000 feet of elevation gained in 4 miles, most of it up murderous switchbacking stone stairs, but we made it all the way up with no ill effects. 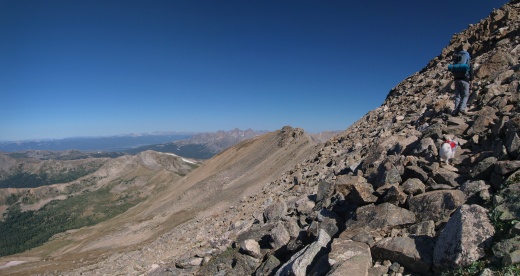 Topping out on the ridge, 600 vertical feet below the summit

Sarah on the summit

With all mountains, no matter how exhausting the climb up may be, getting to the summit is the easy part. Getting back down is where the real challenge comes in. They say most mountaineering accidents happen on the way down.

Our descent was made all the trickier by my plan to climb up and over the mountain and head down the other side into the Silver Creek drainage. Our map showed the drainage, but no marked trail. One especially tired looking guy on the summit had come up from Silver Creek and he pointed out his route to us, but warned the ridge would be super sketchy with the dogs. Using the topo map and line of sight, I plotted a route down the scree slopes to the headwaters of Silver Creek. A far off lake would serve to keep up on track towards the Colorado Trail, which ran across the east end of the drainage and would lead us back to our car.

After leaving the summit, the descent got sketchy very quickly as we scrambled down a perilously steep slope covered by huge shifting boulders and loose rocks. My dogs and my Asolo-clad feet were well off, but Sarah slipped several times and her little dog had a lot of trouble negotiating the big rocks.

Snow storm in the valley below

About halfway down the scree field a storm cloud started rolling in and soon it was snowing. We stopped and redonned our summit down jackets and waited out the storm for as long as we could before we started getting cold and then continued down to the headwaters of Silver Creek. The snow didn’t last for long and the huge, fluffy flakes falling and bouncing like tiny styrofoam balls were lovely.

By the time we reached the headwaters, the storm had passed. The sun came back out and soon it was t-shirt weather again. That’s weather in the mountains! 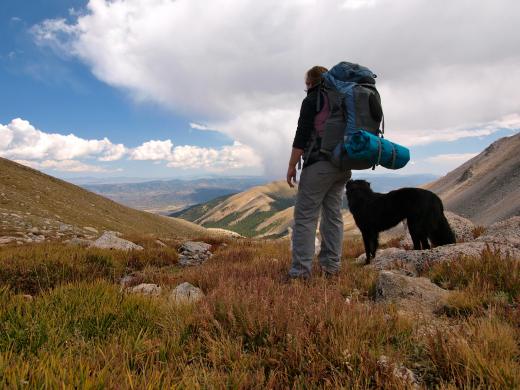 We filled up our water bottles in the snowmelt-fed headwaters of Silver Creek using both a filter and Aquamira drops to fight Colorado’s rampant giardia problem. Then we hung out by the headwaters for more than an hour, enjoying the sun, the solitude and the rest after the chilly and crowded summit. A rest turned out to be a very good idea, as the descent was only just beginning. 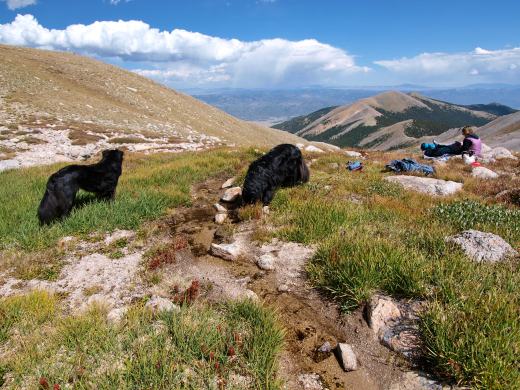 Hanging out by the headwaters of Silver Creek

As we followed Silver Creek down into the valley, the vegetation got thicker and thicker and soon we were stuck. Consulting the topo, I decided the only thing to do was to climb all the way back up the ridge to meet the Colorado trail where it crested over from Avalanche Gulch, the next drainage to the South. Climbing back up was a bitch, but going down had allowed us to bypass the really sketchy part of the ridge hike the other climber had warned us about.

On the way back up, we stumbled upon a real treasure: a big horned ram skeleton complete with skull and horns! The remains didn’t look more than a season old and since we were far off any kind of trail, I am sure we were the first to find it. I so wanted to keep a horn but they weighed easily 15 pounds each and I somehow felt wrong about separating the remains. Hopefully some other ambitious off trail traveler comes across them right when they need  a morale boost. Maybe someday, when I return, they’ll be there waiting for me to find again. 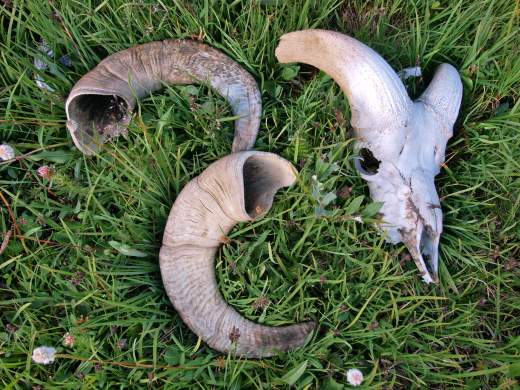 We made it back up to the ridge and connected to the Colorado trail –– and what a lovely sight that path was! We followed it down to the pond we sighted from the summit six hours ago and set up camp on the shores, near an old fallen down cabin.

Sarah woke me up before dawn the next morning, concerned for Oliver, who was whining and had blood in his stool. Poor little guy likely picked up some giardia bugs drinking out of one of the Collegiate’s deceptively clear creeks. We packed up again in early morning darkness and hiked out the four miles to our cars before dawn. Sarah rushed Oliver to an emergency vet and he’s doing much better after a dose of antibiotics. My dogs, who drank much more of the same stream water as Oliver, so far seem fine. They’re four and eight times Oliver’s 12-pounds so maybe they were just big enough to fight off a couple of bugs. Stinking giardia. If these clear, cold, wilderness creeks aren’t safe, no water is and that’s a tragedy.

Hopefully this isn’t my last big backpacking trip of the season – I love fall hiking – but my next few weekends are packed and snow comes early to Colorado. Maybe this will be the year I take up snowshoe backpacking….

Click here to see more pictures from the Collegiate Peaks.

Happy Long Weekend! Hope you’re all getting out and seeing more of the world! M

Mary Caperton Morton is a freelance science and travel writer with degrees in biology and geology and a master’s in science writing. A regular contributor to EARTH magazine, where her favorite beat is the Travels in Geology column, she has also written for the anthologies Best Women's Travel Writing 2010 and Best Travel Writing 2011. Mary is currently based in Big Sky, Montana. When she’s not at the computer she can usually be found outside -- hiking, skiing, climbing mountains and taking photographs. Visit her website at www.marycapertonmorton.com.
View all posts by theblondecoyote →
This entry was posted in Bowie & D.O.G., Hiking!, Photography, Road tripping!, Vagabonding 101 and tagged 14er, backpacking, collegiate peaks, Colorado, dogs, fourteener, giardia, hiking, mount yale, wilderness. Bookmark the permalink.