Posted on December 28, 2012 by theblondecoyote

Hey Everybody! I’m winding down 2012 in a rare state of relative repose, spending these last chilly days of the year hanging out with my family. With my parents in Pennsylvania, my sister in Germany, my brother in California and me all over the map, we’re rarely all in the same place at the same time. I hope you all had a wonderful Christmas and are gearing up for an epic start to 2013!

In 2012, I started the New Year in Germany, celebrated my 30th birthday with a 5-day backpacking trip in the Grand Canyon, fell in love at first sight with a Teardrop camper in Texas and bought my very own less than a month later, took it for a 3-week test drive in Utah, got chased by an angry moose and wrestled alligators in Colorado, found an abandoned filly and Butch Cassidy’s hideout in Wyoming, drove the Loneliest Road in America across Nevada, made new friends in Tahoe, spent a week with my siblings in San Francisco, met a master on the Lost Coast, revisited my post-college cabin in Oregon, met some ski-mountaineers in Washington, crossed into British Columbia, picked up charming Canadian hitchhikers, crossed off my 50th state: Alaska!, hiked up a disappearing glacier, took a geo-pilgrimage to the Burgess Shale fossils (and wrote about it for the January issue of EARTH magazine), climbed an epic mountain above Banff, was welcomed back into the US, visited old friends and favorite trails in Montana and North Dakota, drove east across the US, landed in a house in the Virginia woods right next to the Appalachian Trail, just in time for fall, attended Bridge Day in WV, went backpacking on the AT with old friends, hit Niagara Falls, my 5th Great Lake and the Adirondacks on a road trip, spent 3-weeks housesitting in Vermont where I hiked to Ben & Jerry’s Ice Cream Factory and to the summit of Camel’s Hump and then landed back in PA for the holidays. What a year!

The road into Monument Valley, one of my all-time favorite drives.

In honor of an awesome 2012, here are links to this year’s five most popular posts: 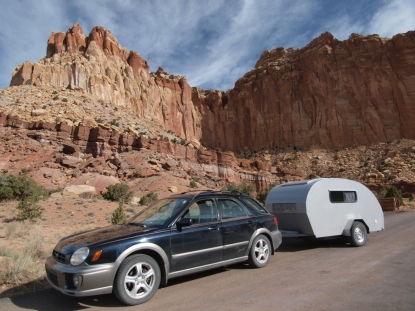 2. Back To the Turquoise Trail

Bowie & the Blonde Coyote by the coyote skull in the juniper tree.

3. Boondocking 101: How To Camp For Free In Beautiful Places

4. How To Wrangle an Alligator! 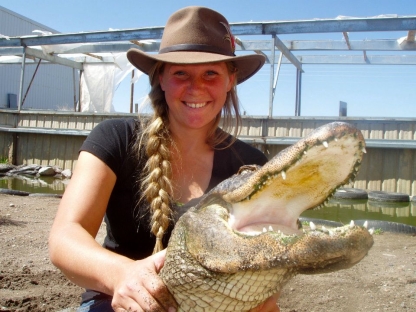 Mary vs. Alligator. I won!

Hiking up the Bright Angel Trail in a blizzard!

Writing is meant to be read and each day, several hundred people visit the Blonde Coyote. I know that’s not a lot on the scale of the World Wide Web, but I’ve always believed in the importance and power of individuals and triple digit visitor statistics never cease to amaze me.

So far on my 2013 calendar: a road trip to the Florida Keys, visiting the Trinity Site in New Mexico, spring in Utah, summer in the Rockies, and an August alligator rodeo in Colorado. What else? We’ll see! I am open to any and all possibilities! My resolution this year is, as always, to see more of the World and in 2013, I’ll be taking you all with me via the Blonde Coyote. So stay tuned! Happy New Year! MCM 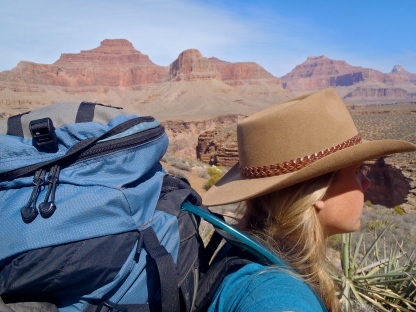 Crossing the Tonto Bench in the Grand Canyon

Mary Caperton Morton is a freelance science and travel writer with degrees in biology and geology and a master’s in science writing. A regular contributor to EARTH magazine, where her favorite beat is the Travels in Geology column, she has also written for the anthologies Best Women's Travel Writing 2010 and Best Travel Writing 2011. Mary is currently based in Big Sky, Montana. When she’s not at the computer she can usually be found outside -- hiking, skiing, climbing mountains and taking photographs. Visit her website at www.marycapertonmorton.com.
View all posts by theblondecoyote →
This entry was posted in Appalachian Trail, Beyond the USA, Bowie & D.O.G., Cowboys & Horses, Hiking!, New Mexico, Photography, Road tripping!, Sustainable Living, Teardrop Trailer, Uncategorized, Vagabonding 101. Bookmark the permalink.