Off the Island, On the Water: Key West Sunset Sail!

Key West is a crowded place, but you don’t visit the Keys to stay on the islands. You visit the Keys to get out on the water! Paddle a kayak, charter a fishing boat, ride a jet ski, board a yacht, embark on a cruise ship. The Keys are also a prime destination for snorkeling and scuba diving, but neither Drew nor I are especially brave about getting in the water – we both prefer to stay on the beach or on a boat. So we went sailing.

Drew and I met in college. We lived two doors down from each other in the dorms, freshman year. At the other end of the hall was a tall guy named Colin, who now goes by Captain Colin, a real live sailor of ships. Earlier this winter, Cpt. Colin sailed a schooner from the New York harbor, down the Atlantic coast to Key West. So when Drew and I decided to road trip to the Keys over his February break, I messaged Colin, now back in Manhattan, for tips. A phone call to his former shipmate Captain Andrew and Colin had a couple of comp tickets for a sunset sail waiting for us in Key West.

The first time I ever went sailing was on a catamaran, in Hawaii, on a field trip to study volcanoes and coral reefs – yeah, geologists take the best field trips – and I so loved the sensation that the next time I lived near a marina, on the Potomac River in Alexandria, Virginia, I signed up for sailing lessons. That summer, on my weekend breaks from interning at EARTH magazine, I learned to sail. Guiding a craft on the edge of wind and water wasn’t intuitive. I learned by doing, luffing and tacking a small Flying Scott back and forth across the Potomac. But that was years ago and I hadn’t made it yet back out to sea.

Bowie Crossing the Potomac in the Flying Scot

In Key West, we set sail on the schooner America 2.0, a replica of the first ship to win the America’s Cup in 1851, also known as the “Low Black” for her low racing profile, painted black. She’s a beautiful boat and fast.

Even the boat was crowded. Out of thirty some people, we boarded last and somehow still got the best seats on the ship: up by the foresail, just behind the swinging jib boom. Facing front, into the waves, we rode the wind to sea and back, returning to harbor at sunset. With the crowded boat and the crowded island behind us and full sails and the open ocean ahead, we felt like the only people on the ship and for those two hours we were Kings of the World! 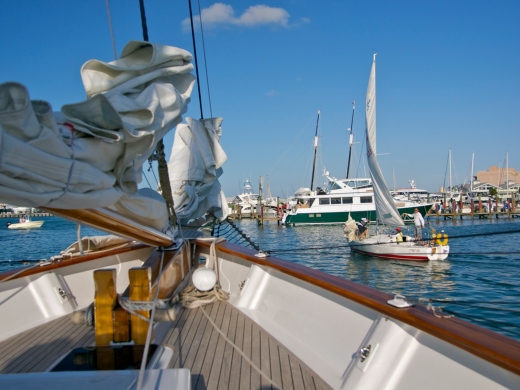 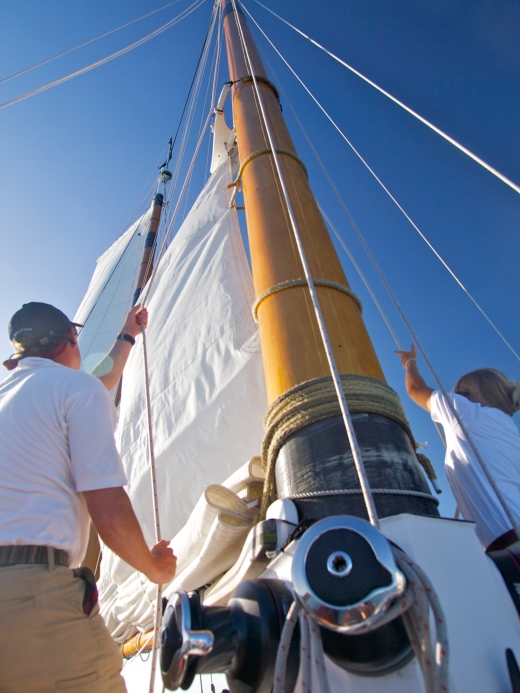 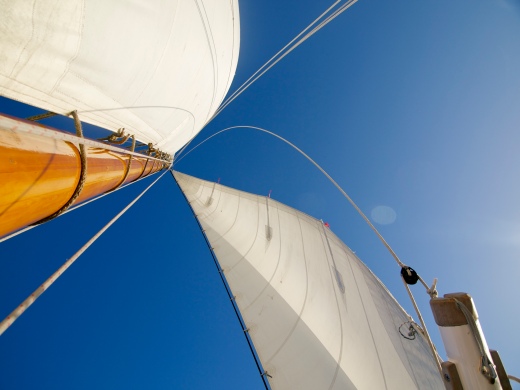 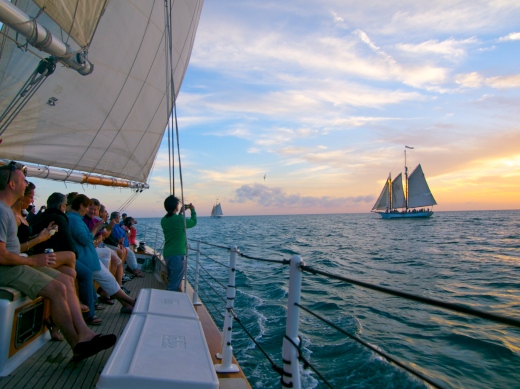 A Full Boat for the Sunset Sail 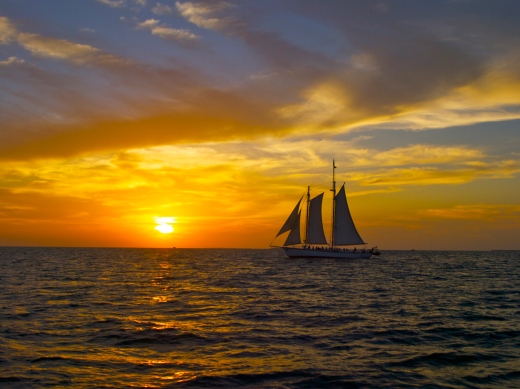 Thanks to Captain Colin, Captain Andrew and crew and Classic Harbor Line for an awesome sunset sail. Stay tuned for a Travels in Geology feature in an upcoming issue of EARTH magazine!

Mary Caperton Morton is a freelance science and travel writer with degrees in biology and geology and a master’s in science writing. A regular contributor to EARTH magazine, where her favorite beat is the Travels in Geology column, she has also written for the anthologies Best Women's Travel Writing 2010 and Best Travel Writing 2011. Mary is currently based in Big Sky, Montana. When she’s not at the computer she can usually be found outside -- hiking, skiing, climbing mountains and taking photographs. Visit her website at www.marycapertonmorton.com.
View all posts by theblondecoyote →
This entry was posted in Photography, Road tripping!, Uncategorized, Vagabonding 101 and tagged America 2.0, Key West, sailing, schooner, Sunset Sail. Bookmark the permalink.

6 Responses to Off the Island, On the Water: Key West Sunset Sail!