If I could have made this enough of a post, it would have everything in it…*

Posted on March 6, 2013 by theblondecoyote 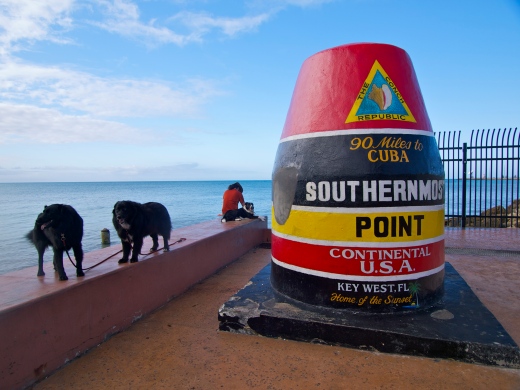 Southernmost Point in the USA!

Look at a map of Key West: it’s a very small island, claustrophobically gridded by streets with only a few small slivers of public beaches. As somebody who usually seeks out the biggest, blankest spots on the map, this was not my usual destination. But every place has its own magic. Besides, I’ve already hit the Northwesternmost and Easternmost points and the geographic center of the U.S.A. Might as well add the Southernmost!

Key West – all 2 by 4 miles of it – is a mosh pit. Lots of people, everywhere, at all times. Except for early morning. That’s the best time for a quiet walk around town. (Well, except for the constantly crowing roosters! Why are there so many chickens in Key West?) Once we got away from the Duvall Street circus and the opulent waterfront hotels and into the interior of the island, we were amazed to discover whole neighborhoods of small, charmingly rundown houses inhabited by a cast of salty local characters. Authentic island life lives on Key West, if you go looking for it! 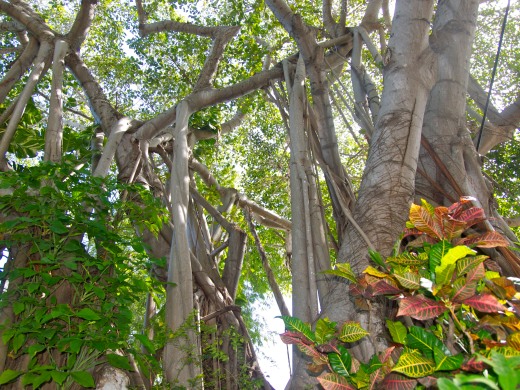 One of the highlights of our morning walk: a massive Banyan tree!

Once the dogs had a good walk, we parked them in the car in a shaded parking garage downtown, where they’d stay cool in the heat of the day and braved the more touristy parts of the island. After some Key Lime pie, we headed to Hemingway’s House. I love visiting writers’ residences but after waiting in line for 15 minutes with a bunch of tourists, most of whom I’d be willing to bet have read little Hemingway and a lot of things-to-do-in-Key-West-checklists, I stepped to the side.

I would have loved to have found some magic corner in Papa’s place, but I knew the experience wasn’t going to be what I wanted it to be. Instead, I checked out a street artist’s wares, spread out on the sidewalk in front of the famous residence. An abstract of Hemingway Playing the Piano, painted on a “Sugared Lime” paint sample from Home Depot, caught my eye and I bought it from Jay the painter for the princely sum of $1 — my one Key West souvenir. I’d so much rather give a buck to an artist than $13 to a tourist trap.

Hemingway Playing the Piano, by Jay. Definitely going in the Teardrop!

Stay tuned for a post on the highlight of our trip to the Florida Keys: a sunset sail!

* This title is a somewhat bastardly tribute to the opening line of my all-time favorite chapter of any book, ever: the last chapter of Death in the Afternoon, which begins “If I could have made this enough of a book, it would have everything in it,” and then goes on to describe the sights, smells and sensations of summer in Spain in the most vivid yet understated poetics. It’s quintessential Hemingway. If you’ve never read Hemingway or never liked his books, or always avoided his grisly bullfighting treatise, do yourself a favor and read Chapter 20 of Death in the Afternoon.

Mary Caperton Morton is a freelance science and travel writer with degrees in biology and geology and a master’s in science writing. A regular contributor to EARTH magazine, where her favorite beat is the Travels in Geology column, she has also written for the anthologies Best Women's Travel Writing 2010 and Best Travel Writing 2011. Mary is currently based in Big Sky, Montana. When she’s not at the computer she can usually be found outside -- hiking, skiing, climbing mountains and taking photographs. Visit her website at www.marycapertonmorton.com.
View all posts by theblondecoyote →
This entry was posted in Photography, Road tripping!, Uncategorized, Vagabonding 101 and tagged Death in the Afternoon, Duvall Street, Ernest Hemingway, Hemingway House, Key West, tourism. Bookmark the permalink.

11 Responses to If I could have made this enough of a post, it would have everything in it…*