Posted on January 15, 2016 by theblondecoyote 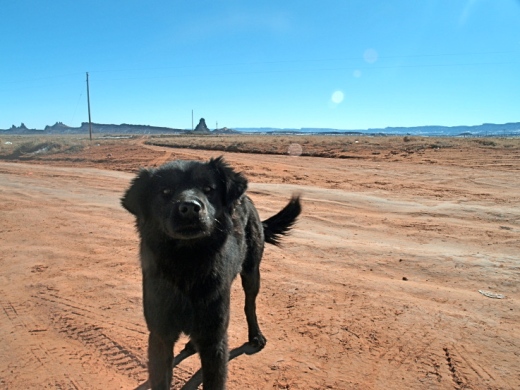 Seven years ago, I took a road trip to Monument Valley, near the Arizona – Utah border, and came home with a puppy. Keeping a skinny, filthy, half-wild mutt I found wandering in the desert could have been a complete disaster, but it was meant to be, and we both knew it at first sight.

On January 14th, 2009, after a long drive from New Mexico, I pulled off the highway onto a random dirt road, parked, and set off across the open desert with my dog Bowie to hike around a distant, unnamed butte.

No place for a puppy.

Rounding the far side, I saw movement under a sage. Crouched in a sliver of shade was a dog, wagging his tail. Something about him made my heart skip a beat. I held onto Bowie, in case the stray was hurt or sick, and talked sweetly to the dog, who cautiously emerged. Then I saw: He was in terrible shape, but filth and ribs aside, he was the spitting image of Bowie.

Monument Valley was an improbable place to find a dog. We were surrounded by nothing but desert. The only manmade things in sight were a barbed wire fence and my car glinting in the distance, parked on the side of a rarely traveled dirt road. No water, no shade, no people, no houses. Nothing. 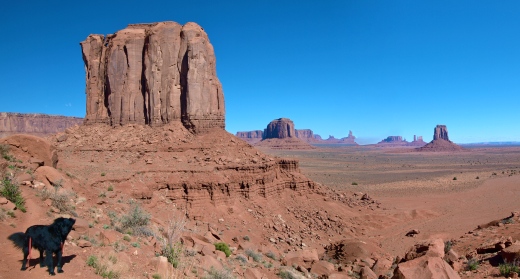 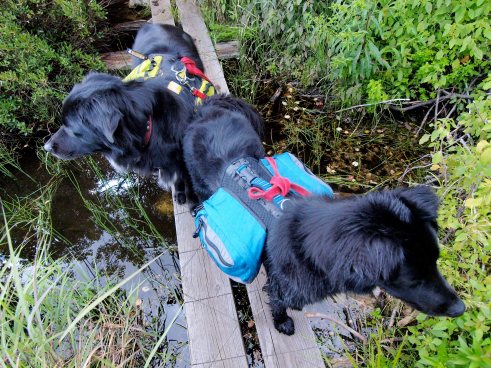 I watched him eat, surprisingly daintily, for a starving dog. Where had he come from? How long had he been out here? Most importantly: What should I do with him? When he finished eating I opened the car door again, and he made the decision for me, jumping in next to Bowie, who outright grinned: Can we keep him?!

Living on the road, housesitting different places every few months, having a second dog – a wild one no less – was totally impractical. But this bedraggled, sweet-eyed creature had crossed my path and chosen to follow me. I wanted to trust him the way he was willing to trust me. I sat in the car for 15 minutes, coming to terms with what I already knew: this dog was mine, then I abandoned my plans to camp out that night, pulled a U-turn and drove straight back to New Mexico with that stinky, wild dog curled up in the backseat.

We got back to the Earthship well after dark and I opened the car door and let him loose. The other two dogs at my place pounced on him, but he sorted himself out like a good-natured dog and soon everybody was running around the driveway together. I took all four on a get-acquainted hike down my long dirt road. The moon was new and the stars were epic; I couldn’t see all-black Dio in the dark, but I was no longer worried about him running away. He had found friends and I knew he’d follow us forever.

It took another day for Dio to let me touch him and a month before he’d roll over for a belly rub. He was especially afraid of men and it was a year until he would willingly go up to strangers. Gradually, he got over his fears of brooms and sticks, running water, bridges and quick movements, though he’s still wary of children and terrified of gun fire.

Seven years later, you’d never know Dio had a rough start. He’s sleek and handsome, obedient, unflinchingly friendly and more worldly than most people. By last count, Dio has been hiking with me in 47 states. (He’s missing Hawaii, Wisconsin, and Minnesota. Bowie has been to 49; he’s only missing Hawaii.) Not bad for a wild dog! He and Bowie are inseparable and people regularly ask me if they’re related. Now 12 years old, Bowie has only a little grey and a touch of arthritis and will still follow me anywhere, though I have to limit his miles to easy ones. Dio has kept both of us young! 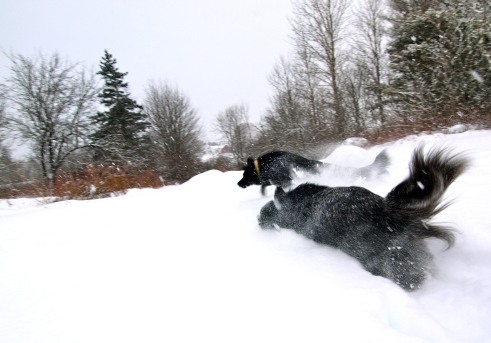 Check out Travels with Bowie & D.O.G. under Archives A to Z for lots of photos from our travels all over North America. These dogs have seen more of the world than most people. 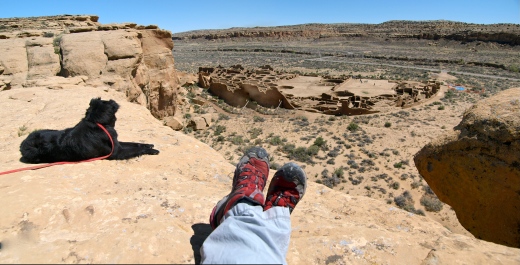 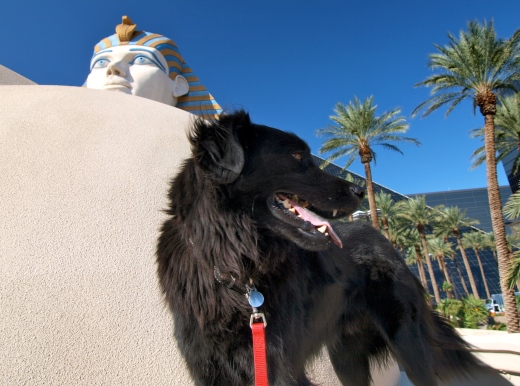 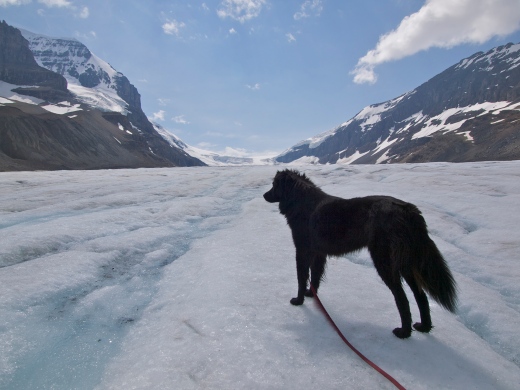 Mary Caperton Morton is a freelance science and travel writer with degrees in biology and geology and a master’s in science writing. A regular contributor to EARTH magazine, where her favorite beat is the Travels in Geology column, she has also written for the anthologies Best Women's Travel Writing 2010 and Best Travel Writing 2011. Mary is currently based in western Colorado. When she’s not at the computer she can usually be found outside -- hiking, skiing, climbing mountains and taking photographs. Visit her website at www.marycapertonmorton.com.
View all posts by theblondecoyote →
This entry was posted in Appalachian Trail, Bowie & D.O.G., Hiking!, New Mexico, Photography, Road tripping!, Vagabonding 101 and tagged adoption, Monument Valley, stray dog. Bookmark the permalink.